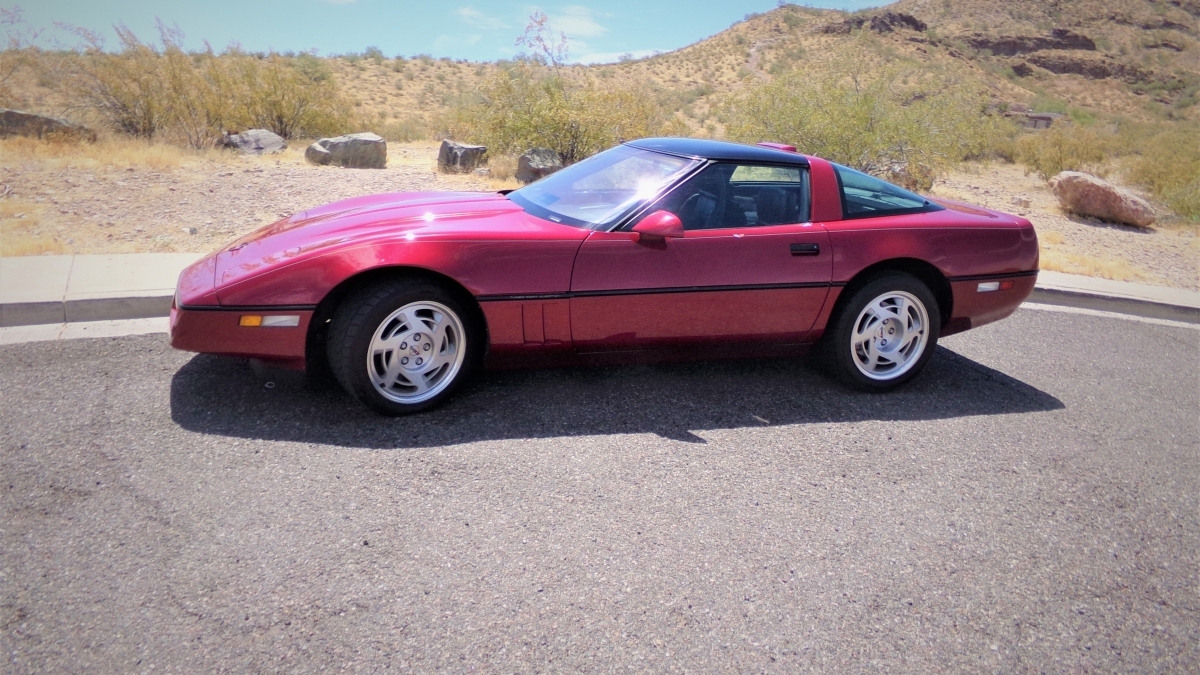 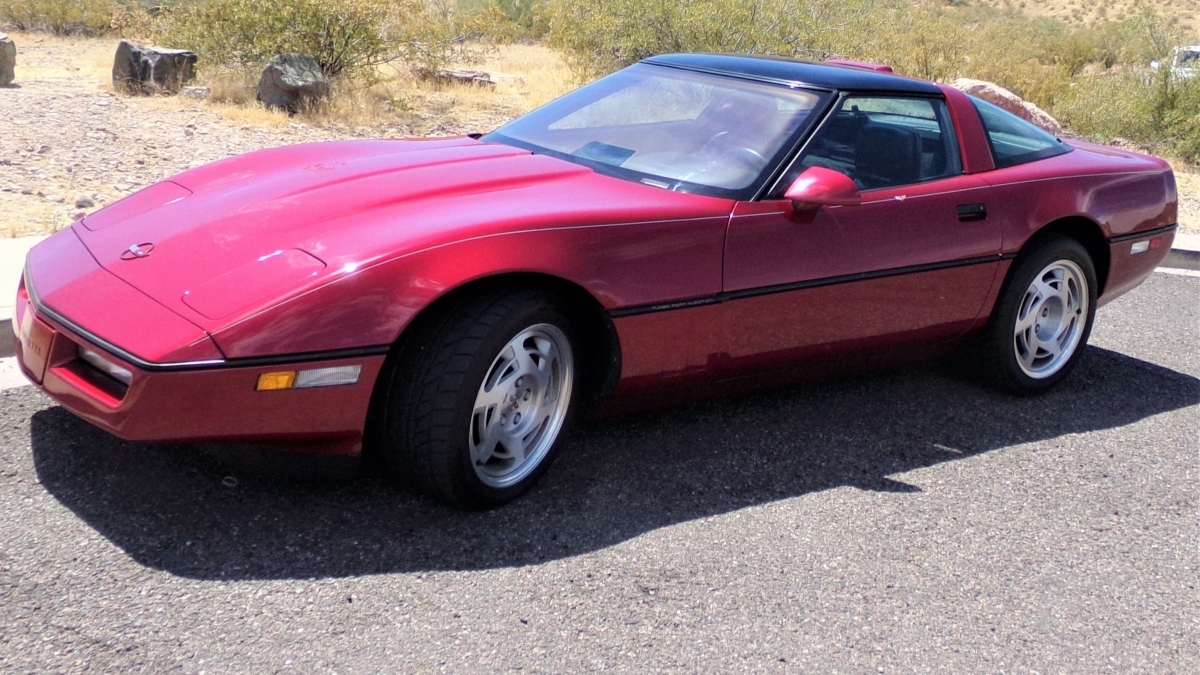 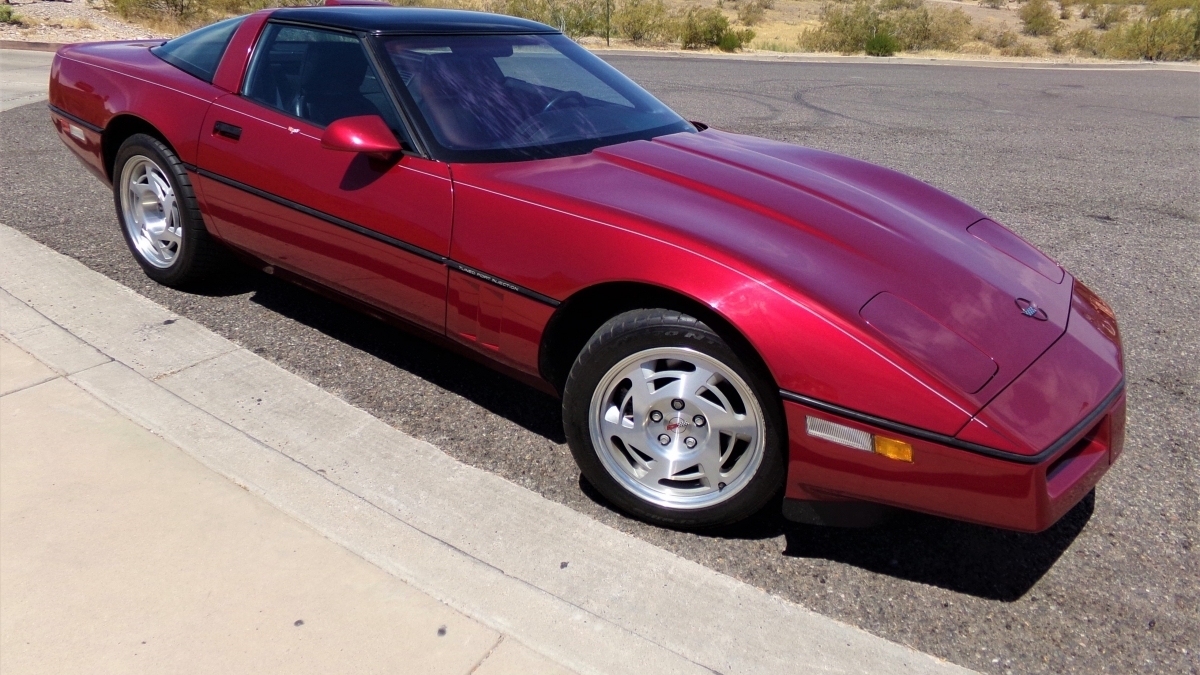 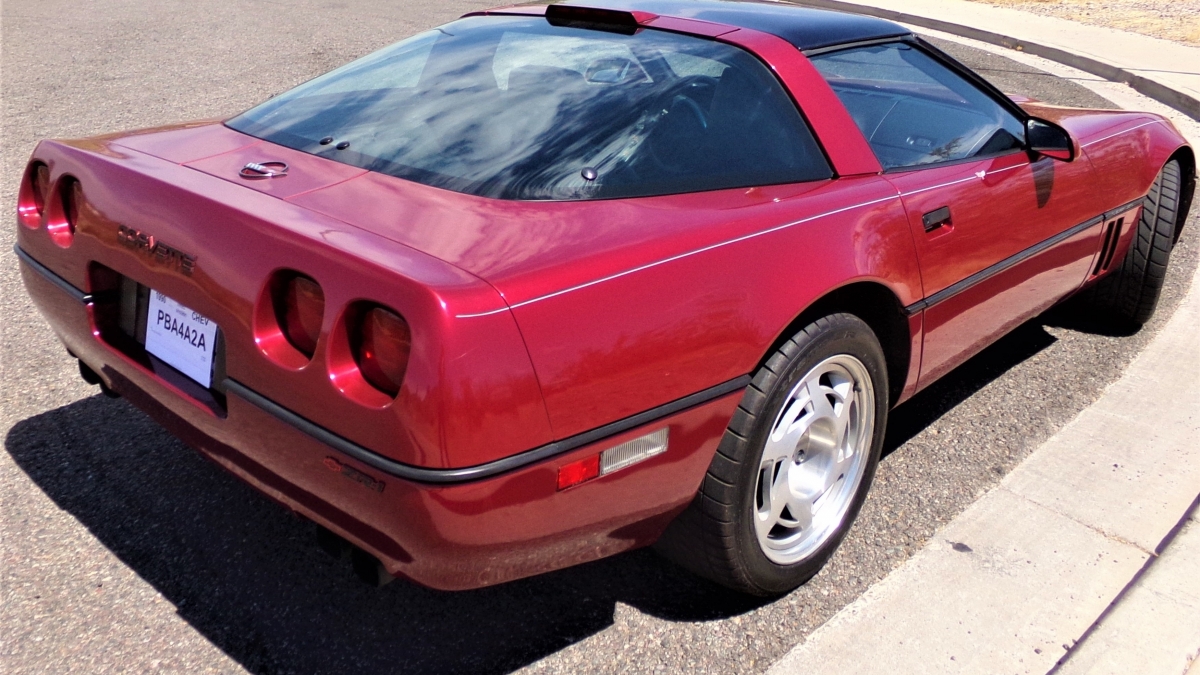 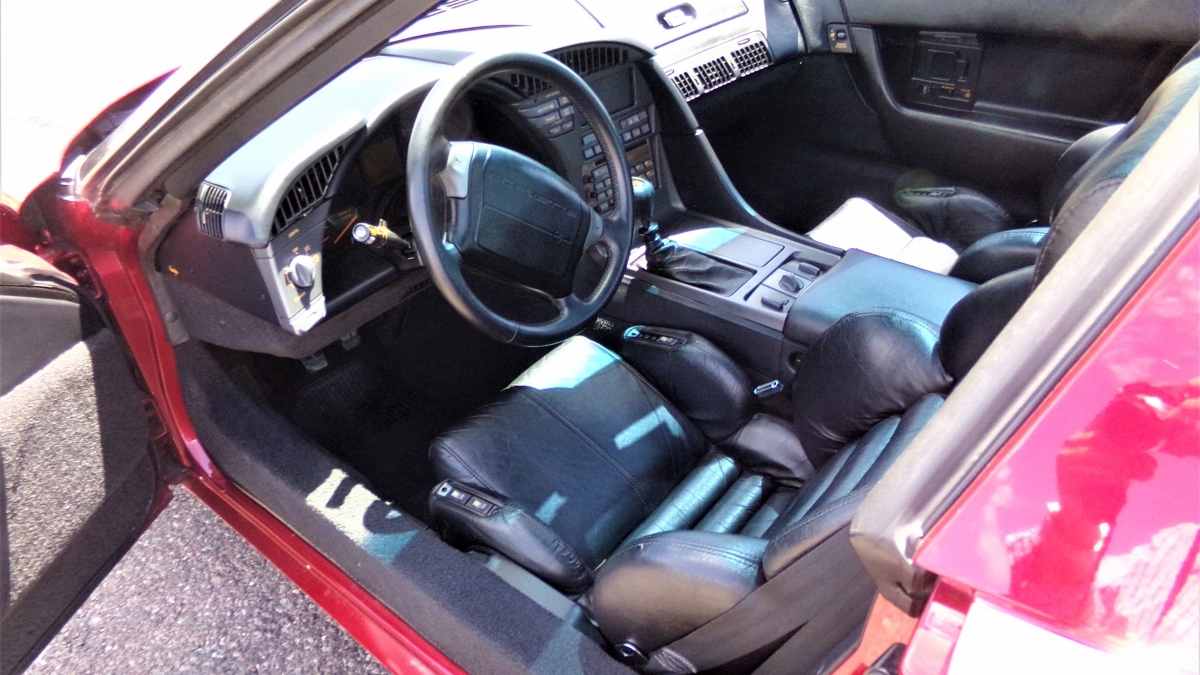 1990 ZR1 Corvette/
In 1990, its first year, the ZR1 was a limited edition and exclusive Corvette model that heralded the return of super performance to the brand that had been considered anemic for almost two decades. It was Chevrolet’s objective to produce the fastest GT car in the world and it came close compared to a Ferrari Testarossa, Lamborghini Countach and Porsche Turbo, with just a few miles an hour difference. It outdid all 3 in braking however. It was known as the “Super Corvette”.
Available for only 3 model years, this example is beautiful with its dark red metallic exterior (2,353 produced in that color) and a luxurious interior in black leather with every option available including the removable tinted glass roof. Only about 34,600 miles since it rolled off the line and what was considered super performance in its day (top speed tested @172 mph and 0 to 60 in 4.8 seconds). With all of that performance at hand, it still gives the driver and passenger a first-rate experience and ride equivalent to only the finest GT’s. And if you want handling and performance it’s there too, especially when you can select the “Full Engine Power” option switch.
The ZR1 is powered by an aluminum 5.6 liter 32 valve dual overhead cam V8 designed by Lotus putting out 380 hp at full power.
Collectable, reasonably rare, low mileage good examples go for up to five times more than a regular Corvette of the same year on the market today.
Six speed manual transmission (what else would you expect?). A super car of its day, but civilized as compared to the Viper RT10 of the same era (which we also have available for rental). This one you wouldn’t mind taking on a long trip up to the mountains, enjoy winding roads and feel comfortable getting there.
Available at $290- per day.

Vehicle will be picked up at my residence or my detail shop both in north Phoenix. Exact address for pickup will be provided upon rental. Delivery and pick up can be provided within a 50 mile radius for $99 per trip

Verified:
Response Rate:
80%
Johnson American's Garage
Continue Conversation
Reserve a Car
Create New
Contact owner
Pickup & return location
Verification
Your phone number
Invalid code, please try again
Your phone number
Thank you!
Phone number was verified successfully.
Smoking
Renters and their passengers are not permitted to smoke in any vehicle in the DriveShare marketplace. Violators are subject to fines and removal from the community.
Driving rental
Find some great roads and experience the car of your dreams from behind the wheel.
Chauffeured Rental
Do you want to be driven in an interesting car? This option is great for weddings or special events.
Event Rental
For non-driving uses like photo shoots and other static displays.
Security Deposit
DriveShare requires a security deposit before you may drive any car. The deposit will be used for any miscellaneous items that may pop up. Deposit amounts are set by each owner. Please refer to our Renter FAQ for additional information.
Weather Policy
Due to the uniqueness of the vehicles listed in the DriveShare marketplace, owners reserve the right to cancel a rental up to 48 hours prior to a rental due to pending inclement weather. Please refer to our Cancellation Policy for further details.
State/City Fees/Taxes
Delivery Fee
Optional: you can add a flat fee for pickup at an airport.
Delivery Fees
Delivery fee is calculated one way, so set the per-mile rate higher to accomodate your time for delivery and pick up.
Vehicle Availability
This car is only available to members of the clubs shown below. If you are already a member, click "Validate membership". If you want to become a member, clicking "Join" will bring you to the club's sign up page. Additional club fees may apply.
Verification!
We cannot validate your membership, as your email is not verified. Please verify your email address.
User authorization
Not a member yet? Sign Up Now!
Warning
Login with Facebook is temporarily unavailable. Please login using your email and password. If you do not know your password, please use "" link on login screen.
Password recovery
Password recovery
Password recovery success.
Please check your email.
Password recovery
Password recovery failed.
Such user does not registered.
Newsletter signing
Thank you for signing up for the DriveShare newsletter.
Be on the lookout for updates, featured cars and exciting events in your area!