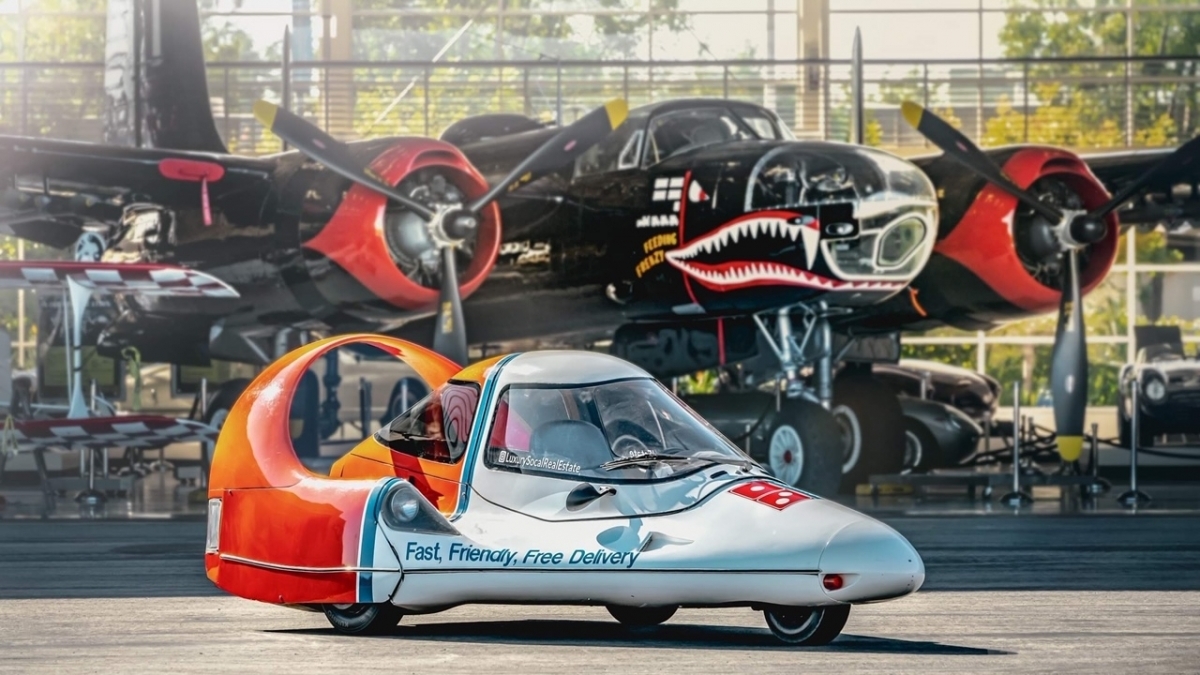 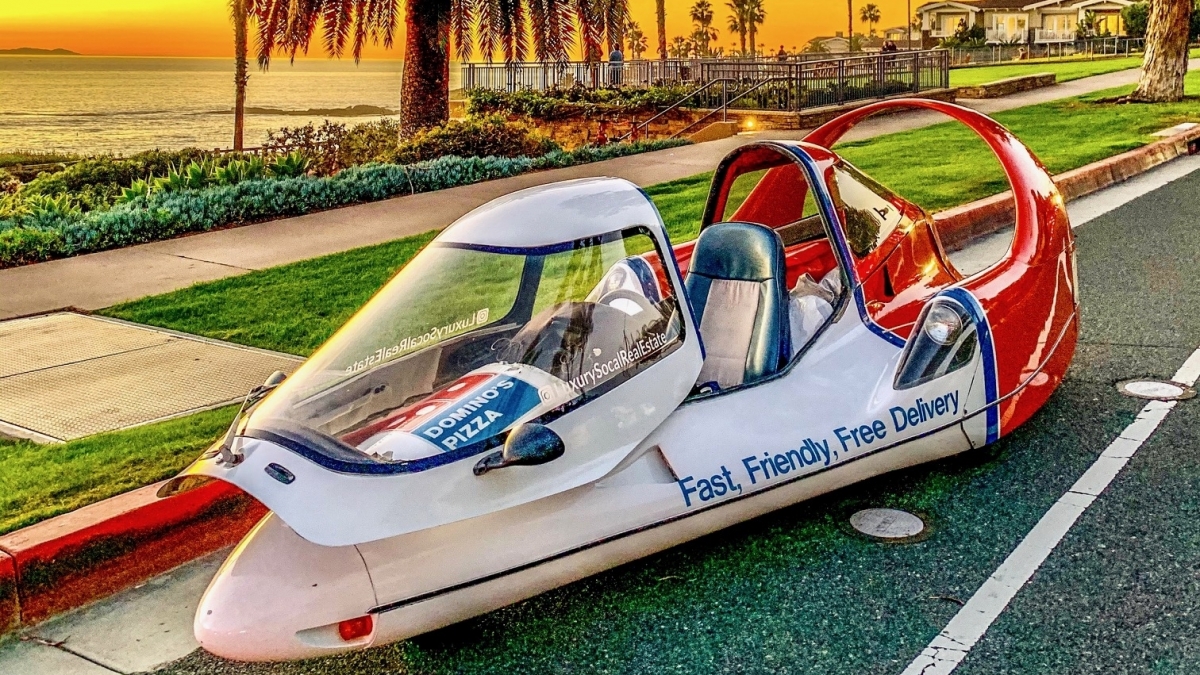 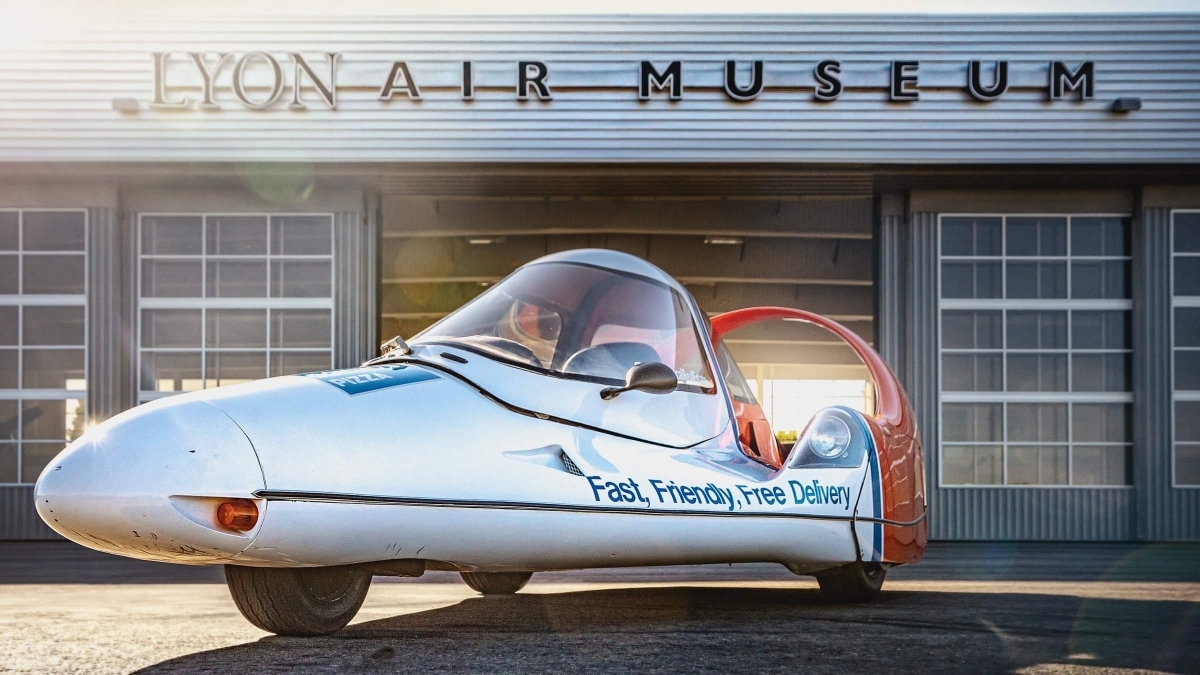 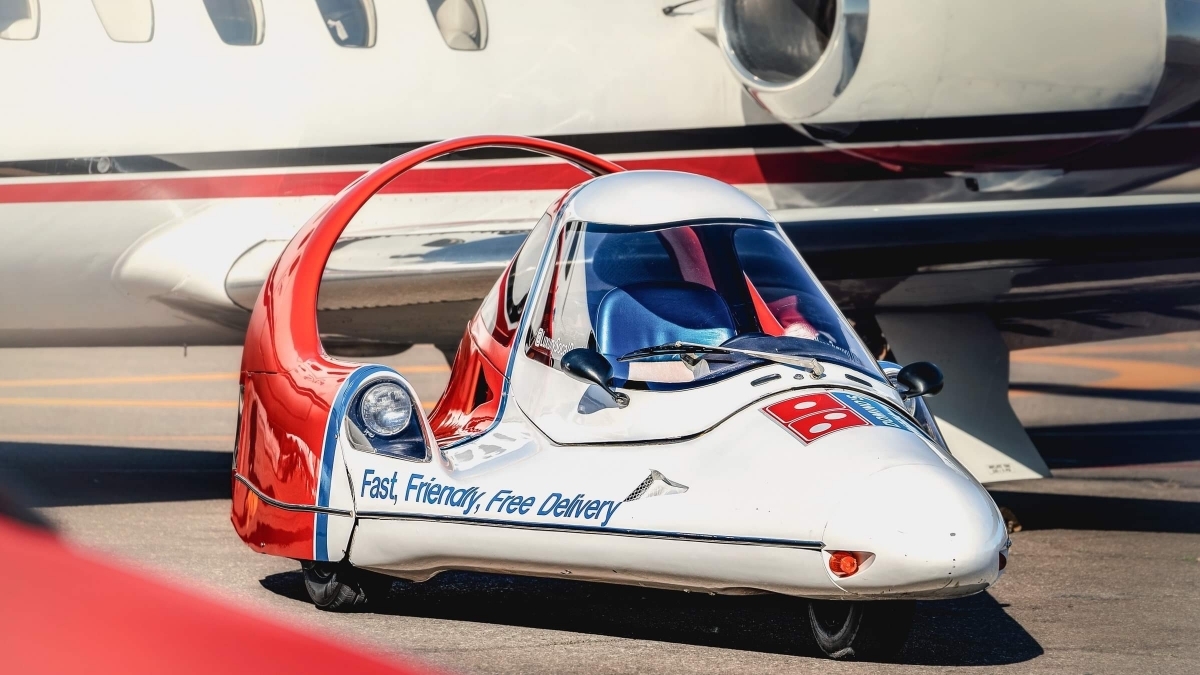 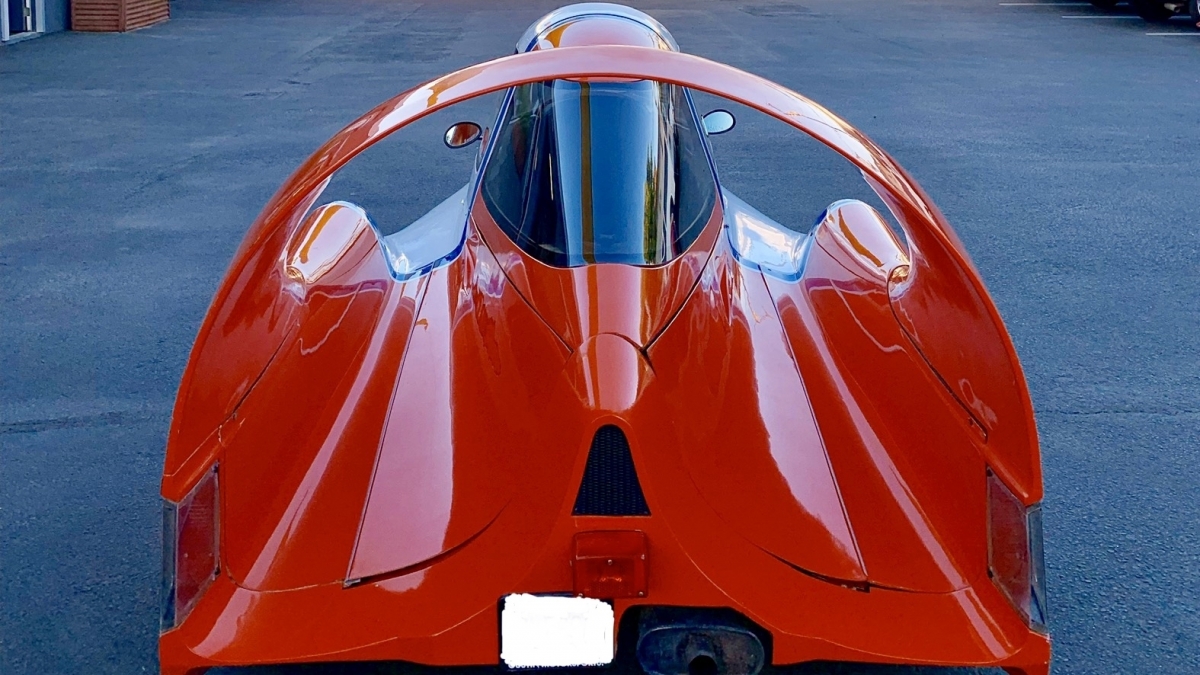 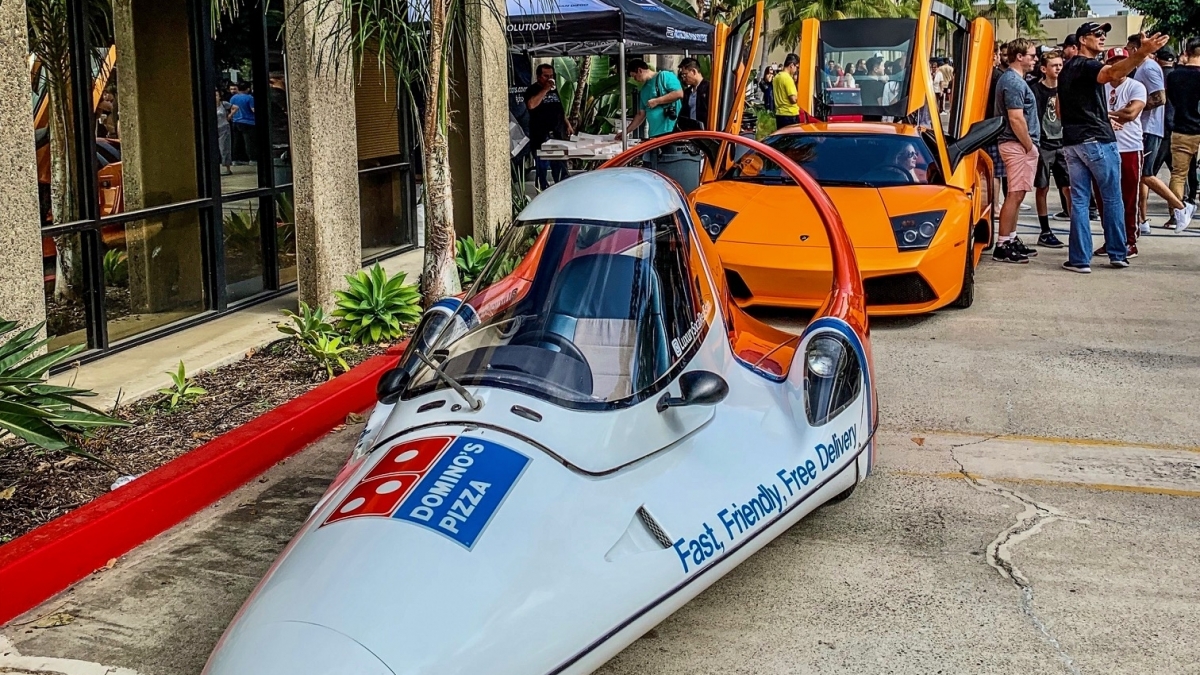 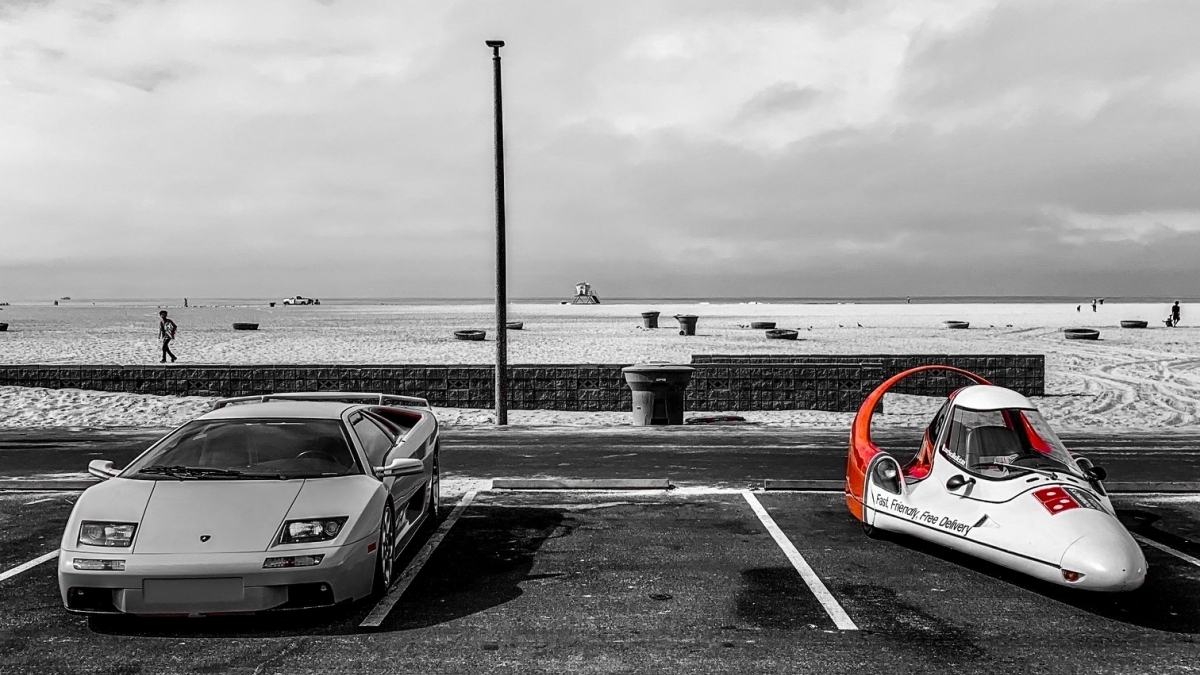 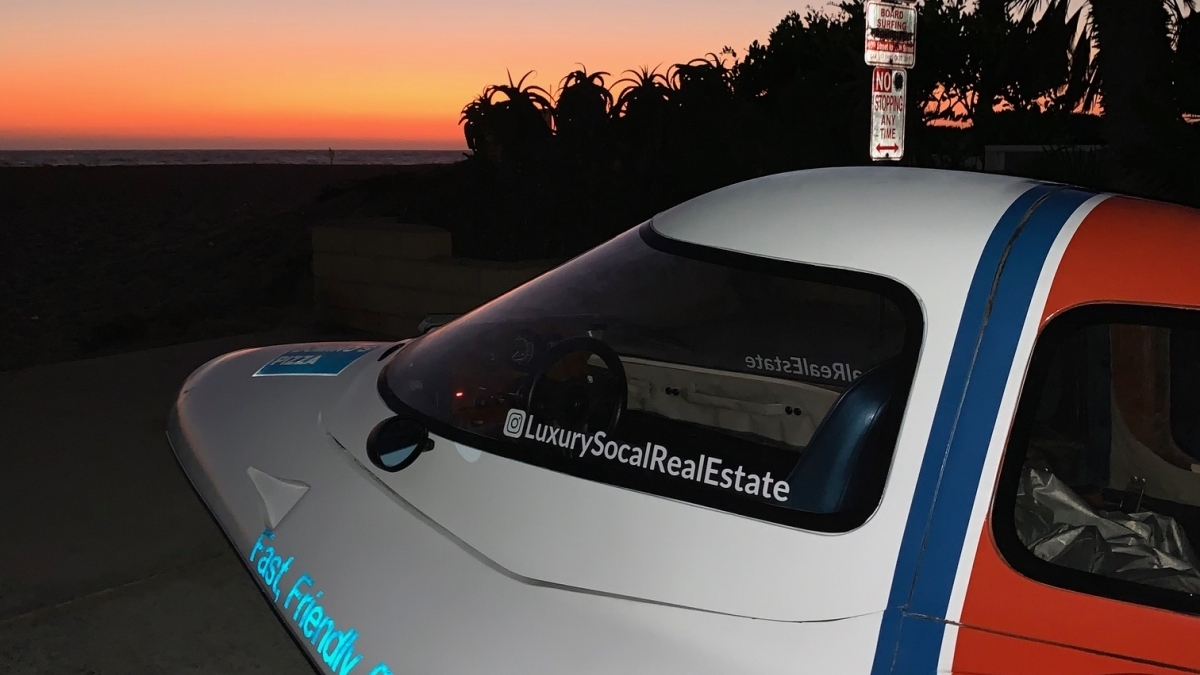 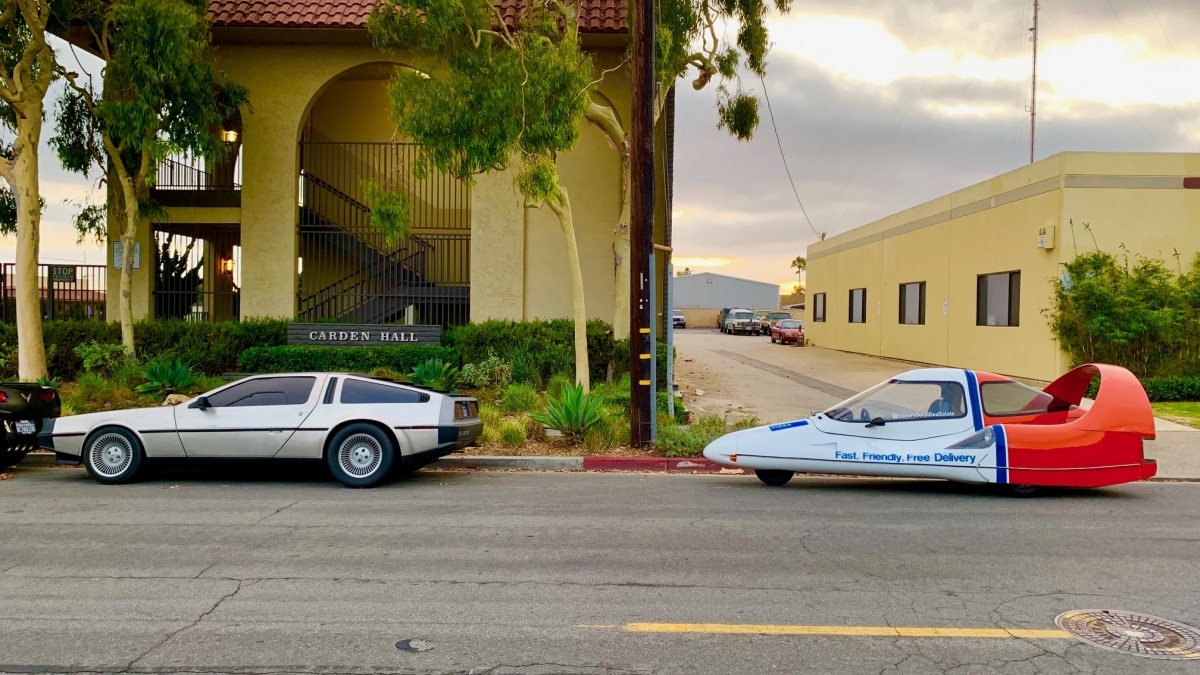 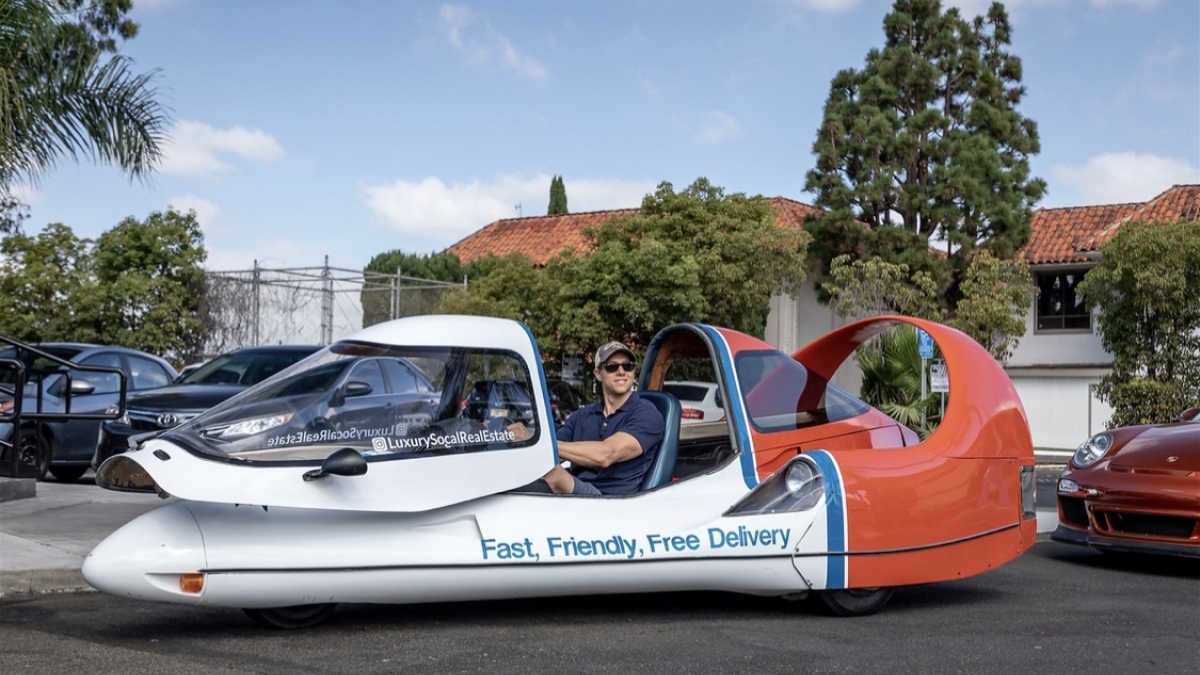 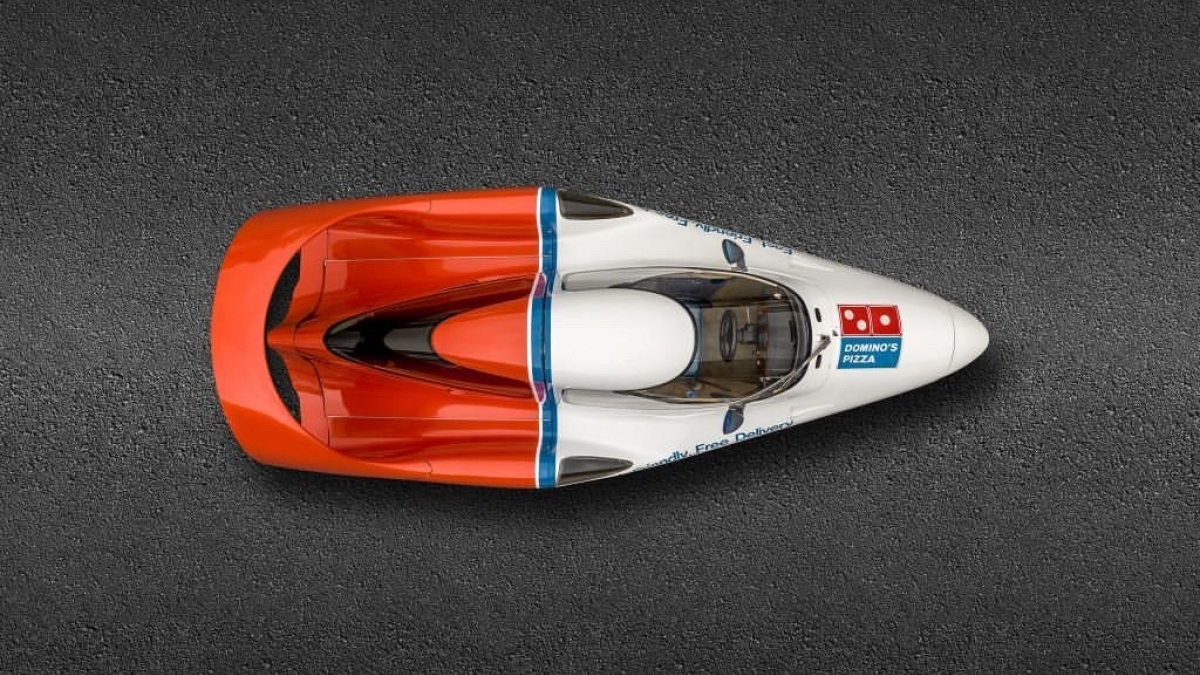 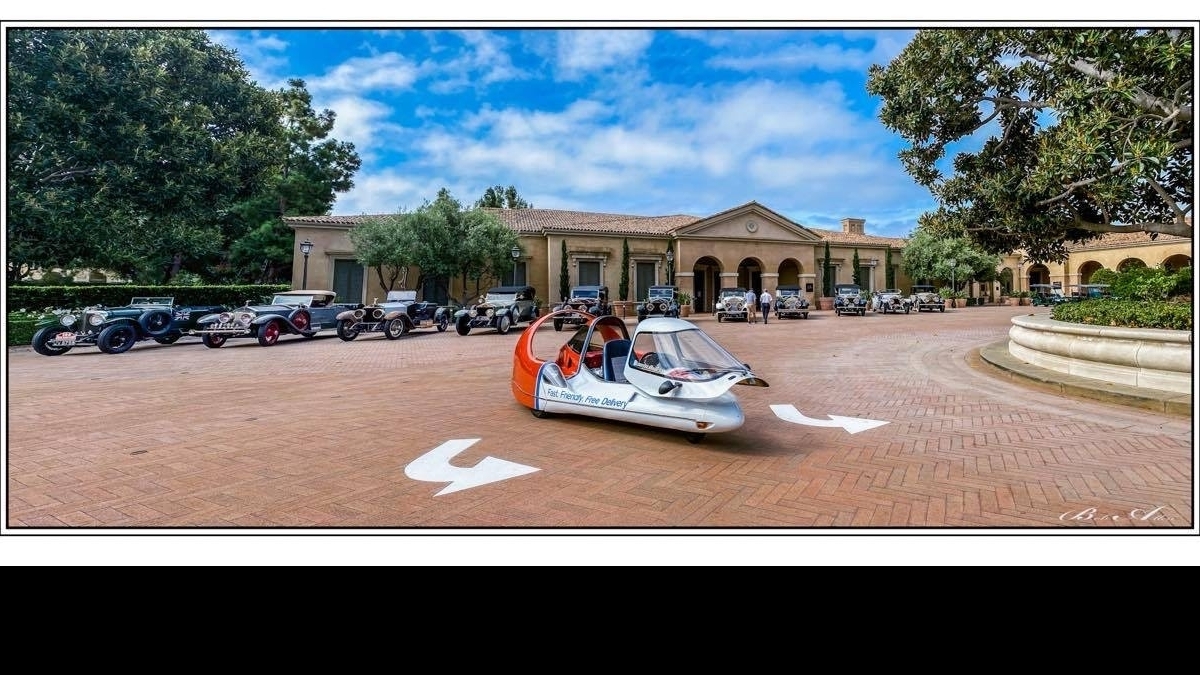 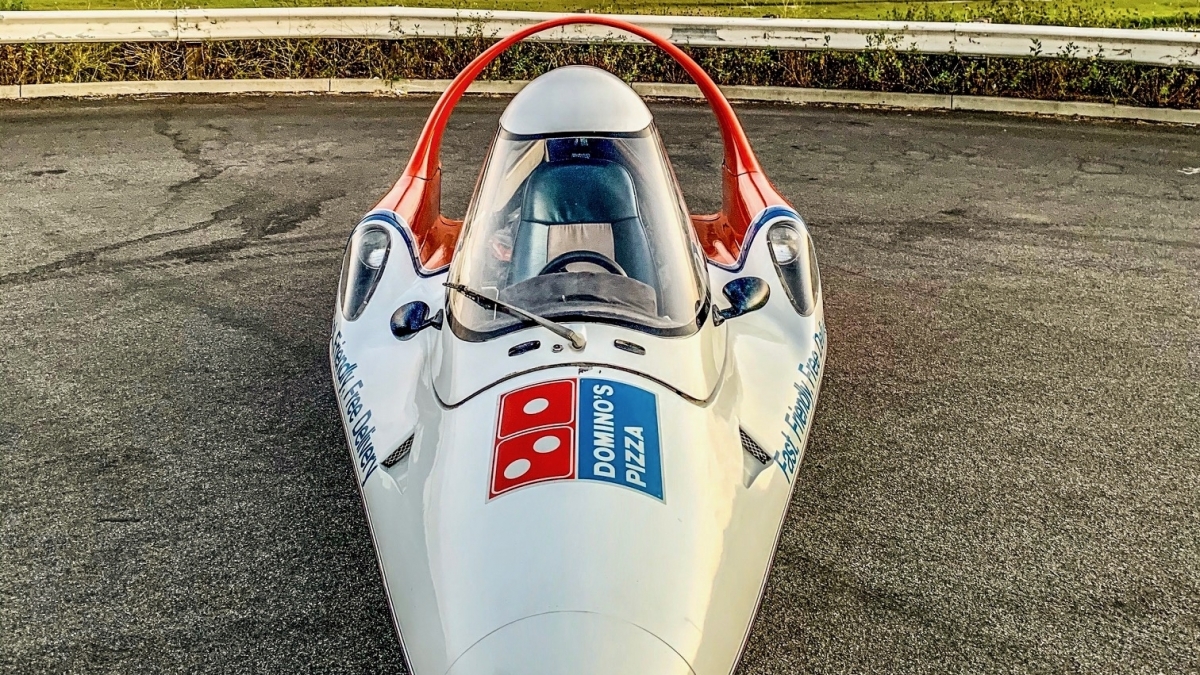 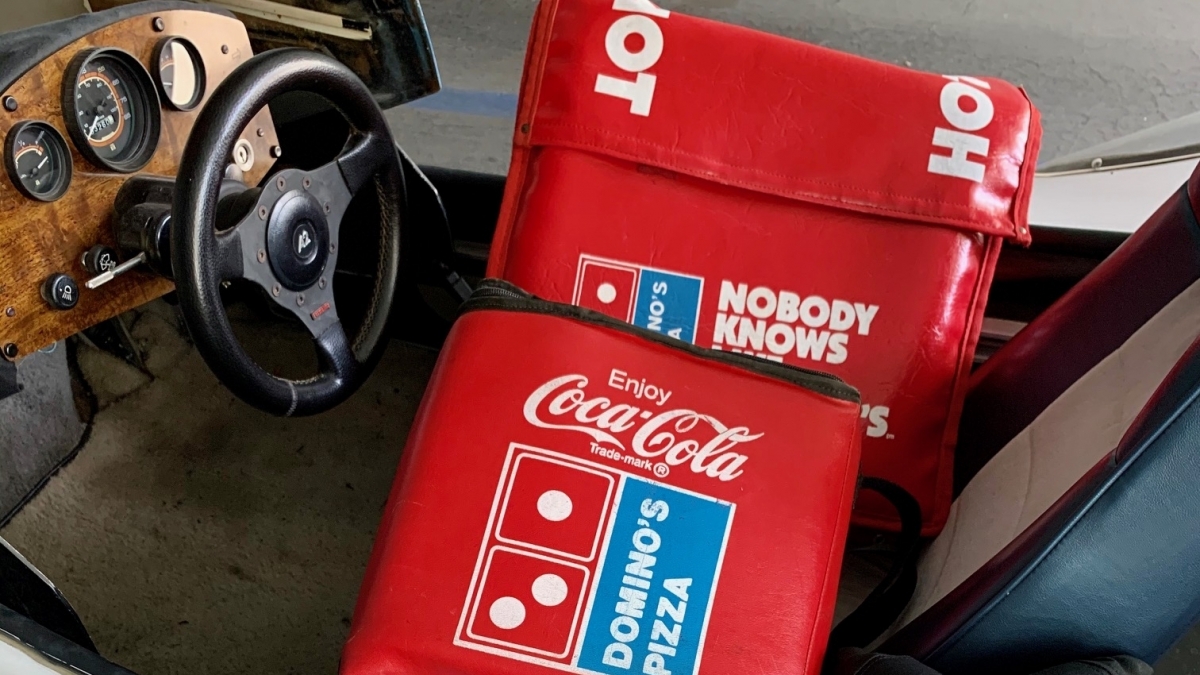 My vehicle is a 1984 Tritan A2 made by Tritan Ventures, Inc. in Ann Arbor, Michigan for Domino's Pizza. It is Vin #001 of only 10 ever made and I believe it is the first commercially produced pizza delivery vehicle. The builder, Douglas Amick, was an aeronautical engineer and used a similar three-wheeled layout and Amick Arch that he and his father, James Amick, conceived for their wind powered "Windmobile" in 1969. By utilizing key learnings from the Windmobile project, their next iteration was the Tritan Aero 135. This three-wheeled vehicle was powered by a 14 horsepower Tecumseh garden tractor engine with the goal of providing efficient commuter transportation for two. "Car & Driver Magazine" reviewed and panned it in 1982, calling it, "An Answer to a Question That Nobody's Asking".

Fast forward to 1984 and Amick was able to get his new design concept, the Tritan A2, in front of executives at the nearby Domino's Pizza headquarters. A product of the oil and gas crisis, the Tritan A2's aerodynamics were honed in the University of Michigan's low speed wind tunnel, leading to a slippery 0.15 coefficient of drag. Powered by a rear mounted 30 horsepower 440 cc air cooled rotary engine made by Syvaro, the Tritan A2 is said to be able to reach speeds of 95 mph and achieve up to 80 mpg. With its forward sliding cockpit, large rear wing for stability, and tight, 24 foot turning radius, it would be the envy of every pizza delivery driver across the nation.

Vin #001 was campaigned and tested by Domino's Pizza from 1985-1986, where it was also displayed at new store openings across the country. Each Tritan A2 was originally sold to Domino's for $15,000, which is more than the current DXP delivery vehicles cost after inflation is calculated. When the test program ended unsuccessfully, Domino's Pizza removed the pizza warming ovens that were installed behind the driver's seat and donated the vehicles to various museums. After meeting Tom Monahan, the founder of Domino's Pizza, at the Auburn Cord Duesenberg Museum in Indiana in 1986, Tritan A2 #001 was presented to David A. Geisler, the owner of the Pioneer Auto Museum.

I had no idea that these vehicles even existed until I saw a "For Sale" ad in Ohio for Tritan A2 Vin #005 on Facebook Marketplace. Most people impulse buy a pack of gum, but here I was about to impulse buy a random fiberglass space ship on three wheels from 2,000 miles away. After agreeing on a sales price with that seller, he informed me that he had already promised it to another buyer. Although disappointed, I set out to learn everything I could about them and eventually purchase one. I located the other 6 surviving Tritan A2's after researching what little information there was online and speaking with my friend and fellow Tritan A2 owner, Steve Cochran.

Since there were only 10 total vehicles made, I channeled my inner Ricky Bobby and decided that, "If you ain't first, you're last". I called the Pioneer Auto Museum on a whim and left a message regarding Tritan #001 for David Geisler. During my call with Mr. Geisler, he recognized our shared love for unique vehicles and we struck a deal, sight unseen, about a month later. Pioneer Auto Museum had only driven Vin #001 once in 1986 and subsequently lost the keys after parking it in their museum for 33 years. As you can imagine, shipping an inoperable three-wheeled vehicle that sits a few inches off of the ground from a remote part of the Midwest to Southern California proved to be another challenge. We waited months for the weather to improve, but it continued to snow in South Dakota until the middle of May when it was picked up by the enclosed shipper.

Because this vehicle represents an important slice of pizza delivery history (pun intended), my goal for the restoration was to keep it as original as possible, while also making it safe and reliable. Even after 37 years, it has been preserved in such incredible condition that the original CVT transmission belt is still installed. I have spent years looking for the rarest and most unique vehicle to start my collection and feel honored to be its new steward.

My favorite memory thus far has been when I showed my Tritan A2 at the Little Car Show in Pacific Grove during the 2019 Car Week and won the award for "Veteran's Choice". My father and deceased grandfathers were war veterans, so receiving this award means even more to me. Two of the show attendees told me that they had fond memories of seeing my vehicle being driven in Ann Arbor, Michigan 35 years ago. Another local gentleman even helped me troubleshoot some minor issues and stored it safely for me while I was in town. My Tritan A2 also caught the eyes of Hagerty and AutoWeek writers, who featured it in their articles about the car show. To be recognized by the automotive publications that I grew up reading is a tremendous feeling.

Although my Tritan A2 is anything but fast, I have lovingly named it the "Pizza Rocket" and look forward to sharing it with other pizza and unique vehicle enthusiasts in the near future. The Pizza Rocket garners enthusiastic thumbs up from all ages and receives more attention than 7 figure hyper cars. I look forward to showcasing it in commercials, print ads, and grand opening events! Lyon Air Museum photos by Royce Rumsey, Aerial photo and side photo by Ted7, photo with the Rolls Royce Silver Ghost gathering by Bob Allen, and the rest were taken by me.

My Tritan A2 will most likely need to be carefully flat bed transported to your location unless it's within 25 miles of 92629. Transport fees will be the responsibility of the renter. 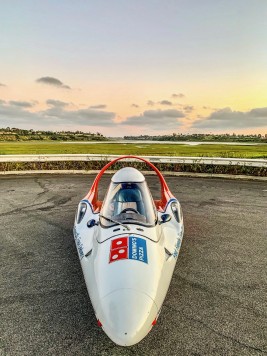 Verified:
Robert's Garage
Continue Conversation
Reserve a Car
Create New
Contact owner
Pickup & return location
Verification
Your phone number
Invalid code, please try again
Your phone number
Thank you!
Phone number was verified successfully.
Smoking
Renters and their passengers are not permitted to smoke in any vehicle in the DriveShare marketplace. Violators are subject to fines and removal from the community.
Driving rental
Find some great roads and experience the car of your dreams from behind the wheel.
Chauffeured Rental
Do you want to be driven in an interesting car? This option is great for weddings or special events.
Event Rental
For non-driving uses like photo shoots and other static displays.
Security Deposit
DriveShare requires a security deposit before you may drive any car. The deposit will be used for any miscellaneous items that may pop up. Deposit amounts are set by each owner. Please refer to our Renter FAQ for additional information.
Weather Policy
Due to the uniqueness of the vehicles listed in the DriveShare marketplace, owners reserve the right to cancel a rental up to 48 hours prior to a rental due to pending inclement weather. Please refer to our Cancellation Policy for further details.
State/City Fees/Taxes
Delivery Fee
Optional: you can add a flat fee for pickup at an airport.
Delivery Fees
Delivery fee is calculated one way, so set the per-mile rate higher to accomodate your time for delivery and pick up.
Vehicle Availability
This car is only available to members of the clubs shown below. If you are already a member, click "Validate membership". If you want to become a member, clicking "Join" will bring you to the club's sign up page. Additional club fees may apply.
Verification!
We cannot validate your membership, as your email is not verified. Please verify your email address.
User authorization
Not a member yet? Sign Up Now!
Warning
Login with Facebook is temporarily unavailable. Please login using your email and password. If you do not know your password, please use "" link on login screen.
Password recovery
Password recovery
Password recovery success.
Please check your email.
Password recovery
Password recovery failed.
Such user does not registered.
Newsletter signing
Thank you for signing up for the DriveShare newsletter.
Be on the lookout for updates, featured cars and exciting events in your area!