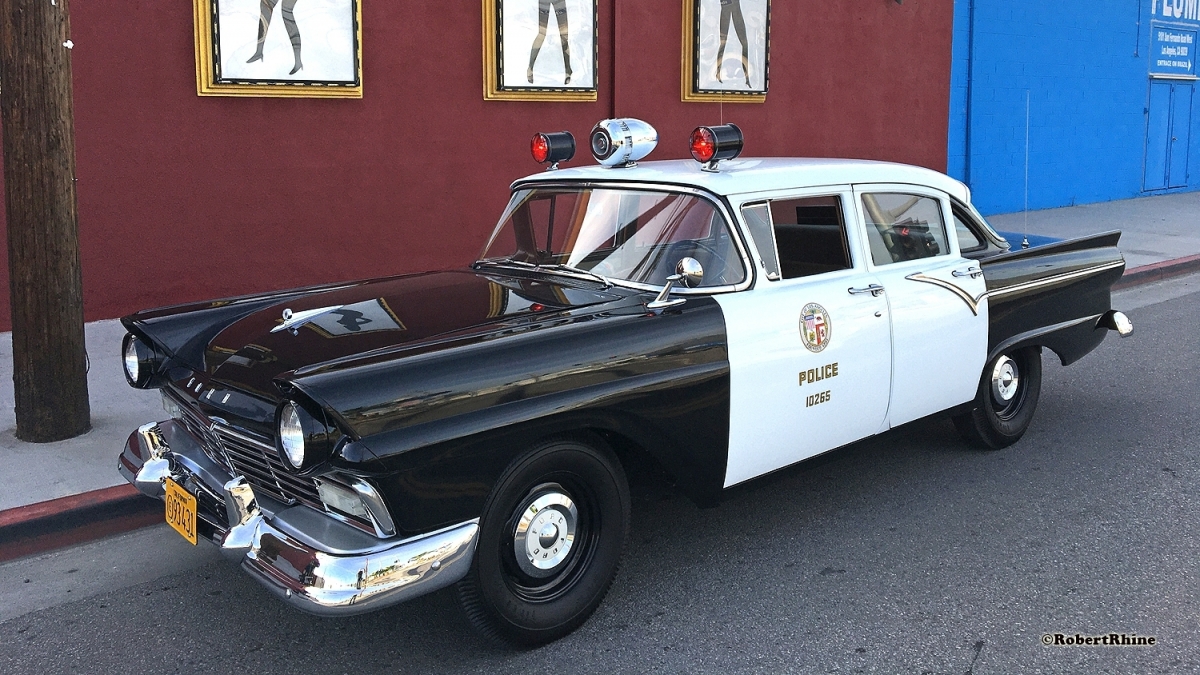 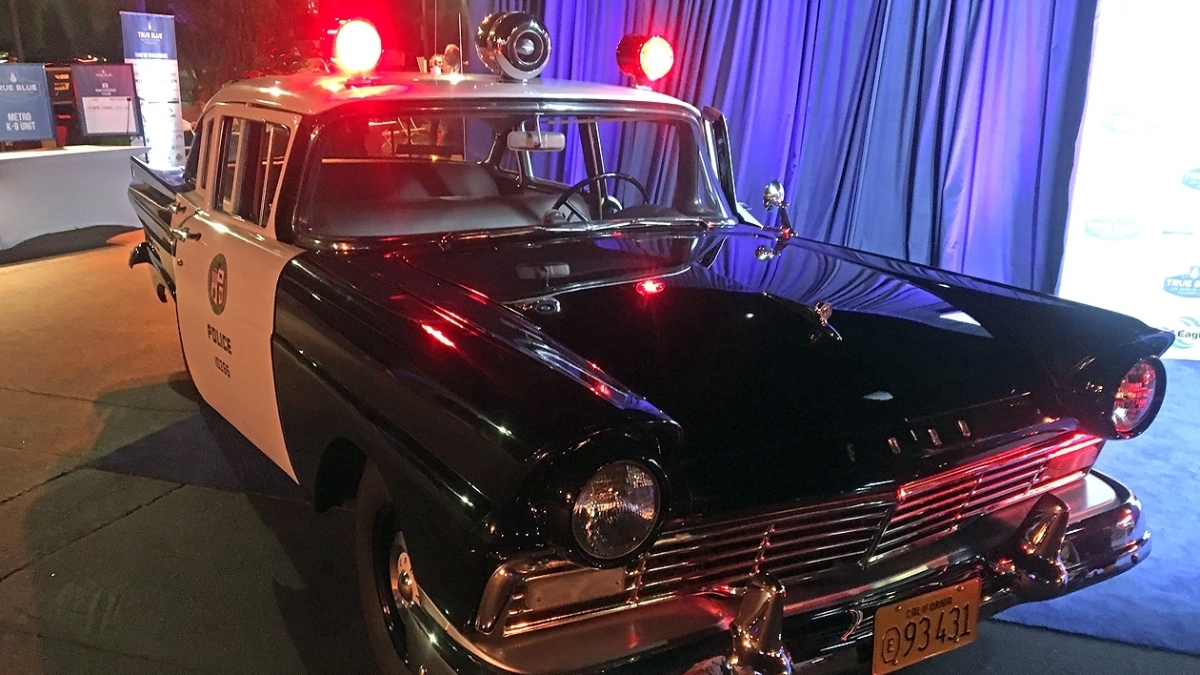 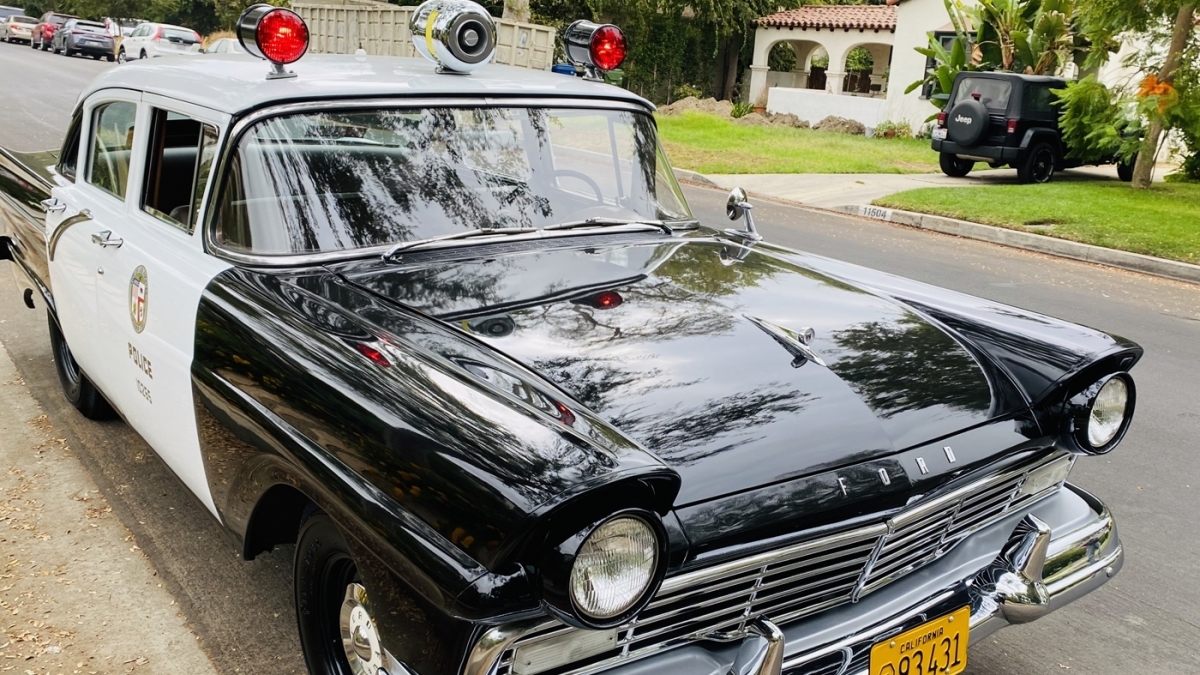 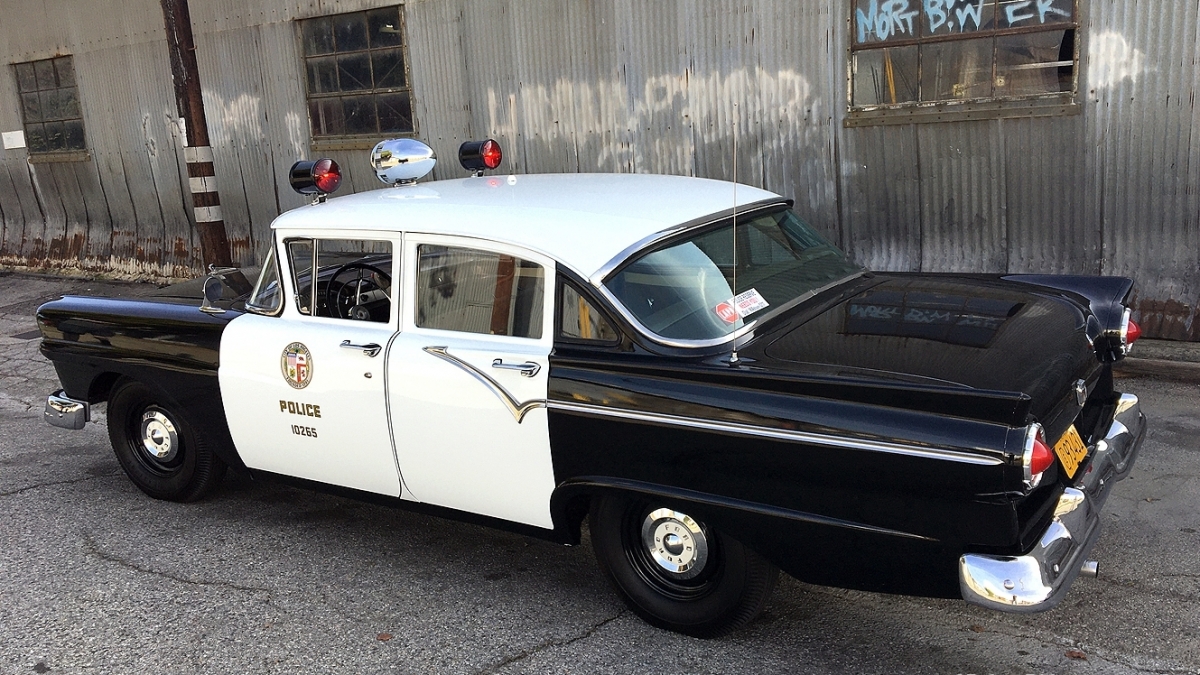 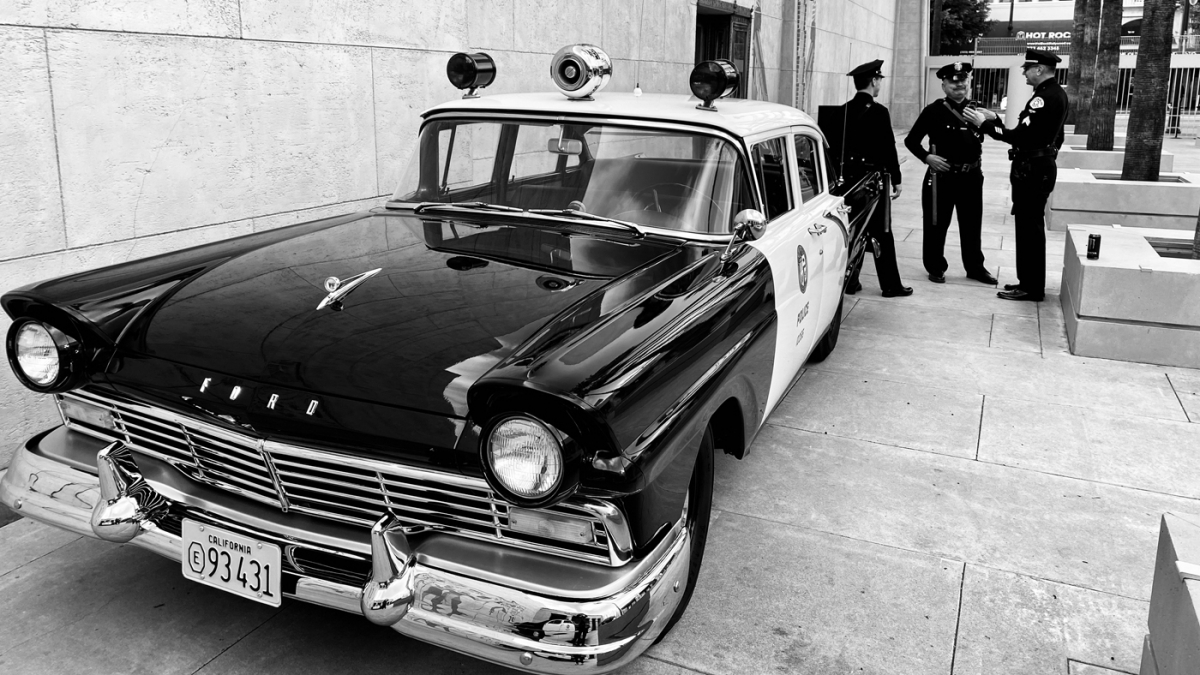 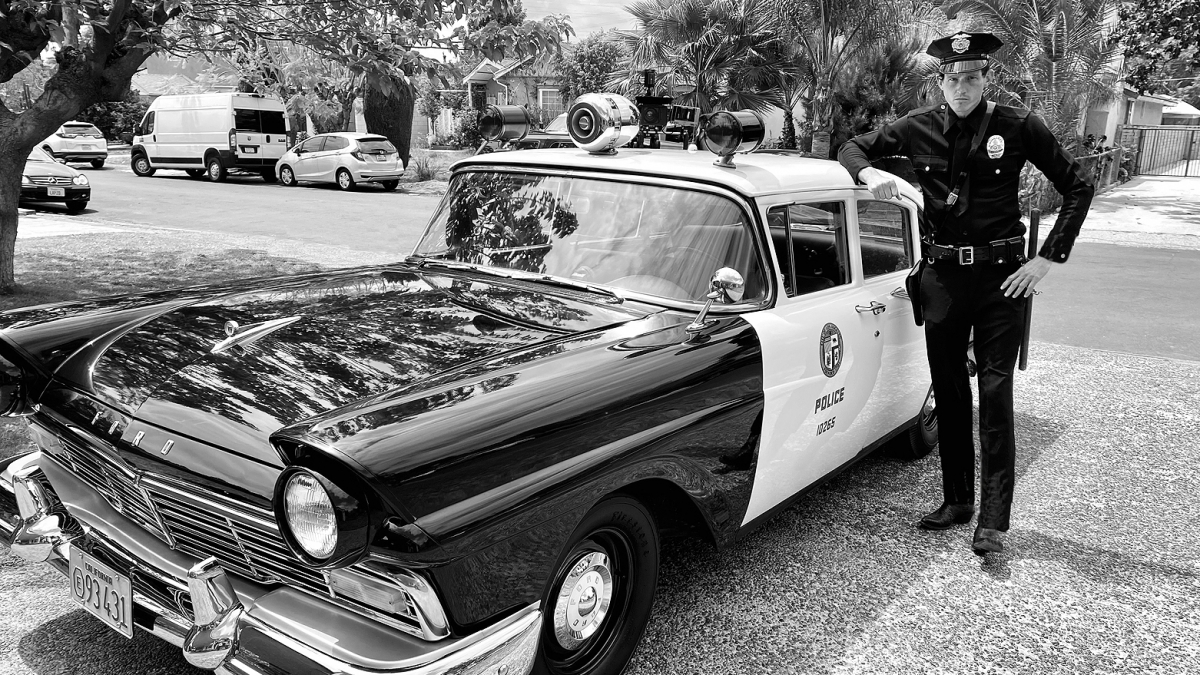 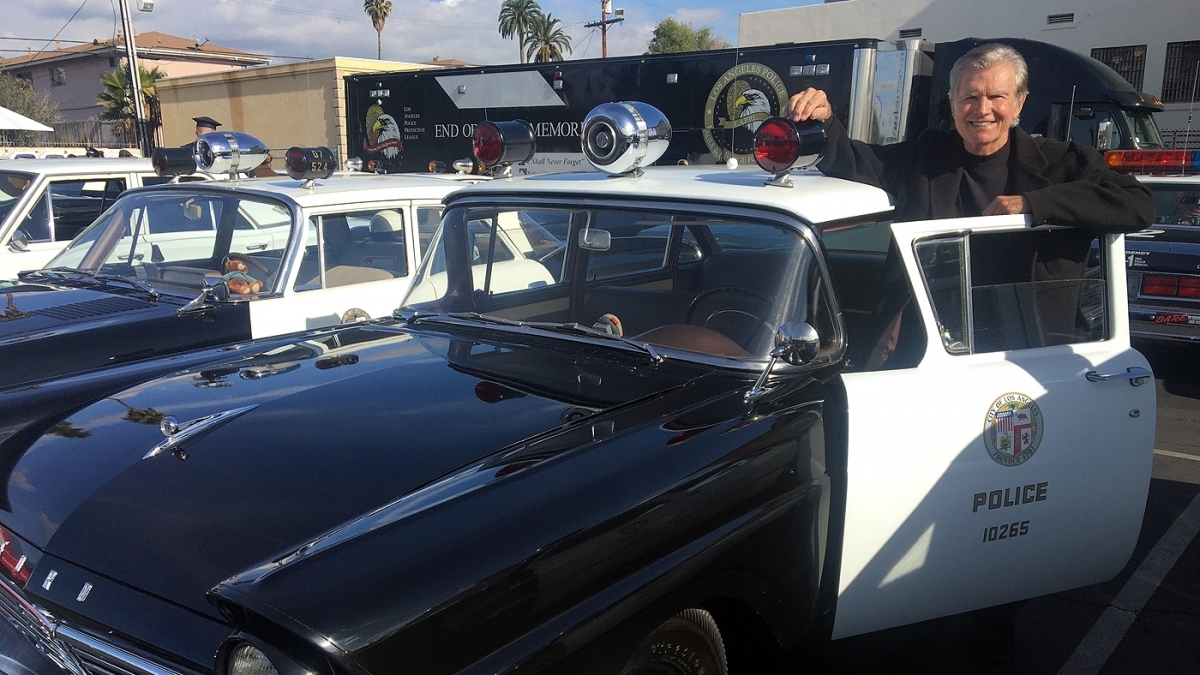 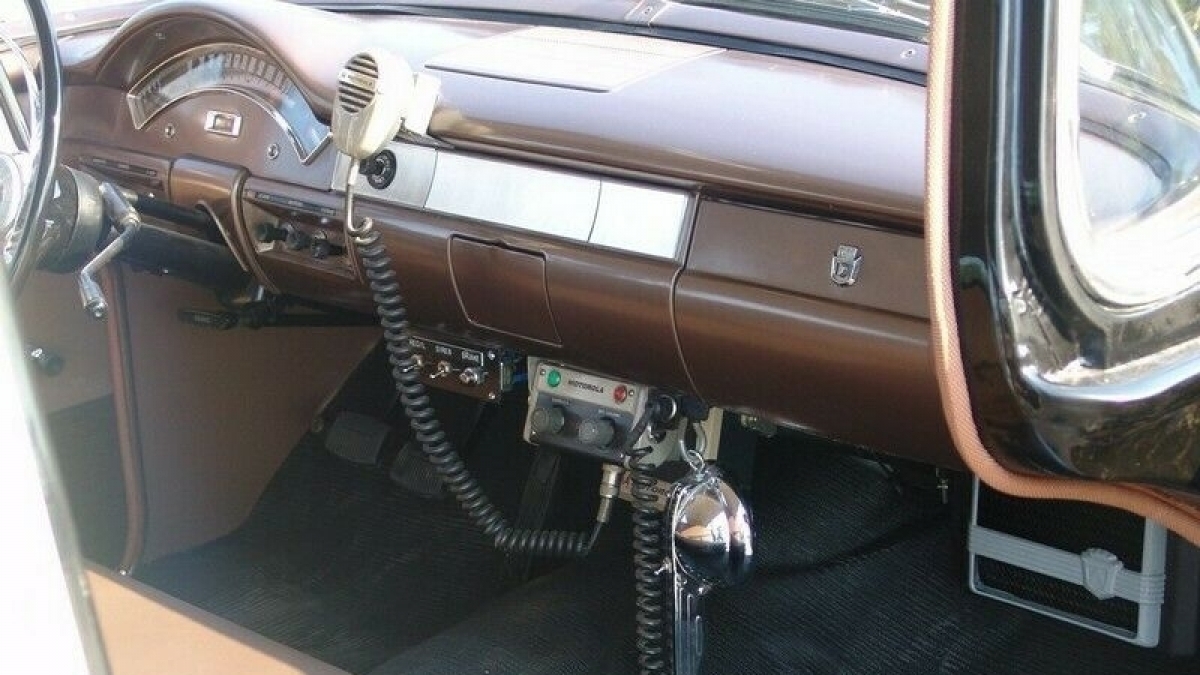 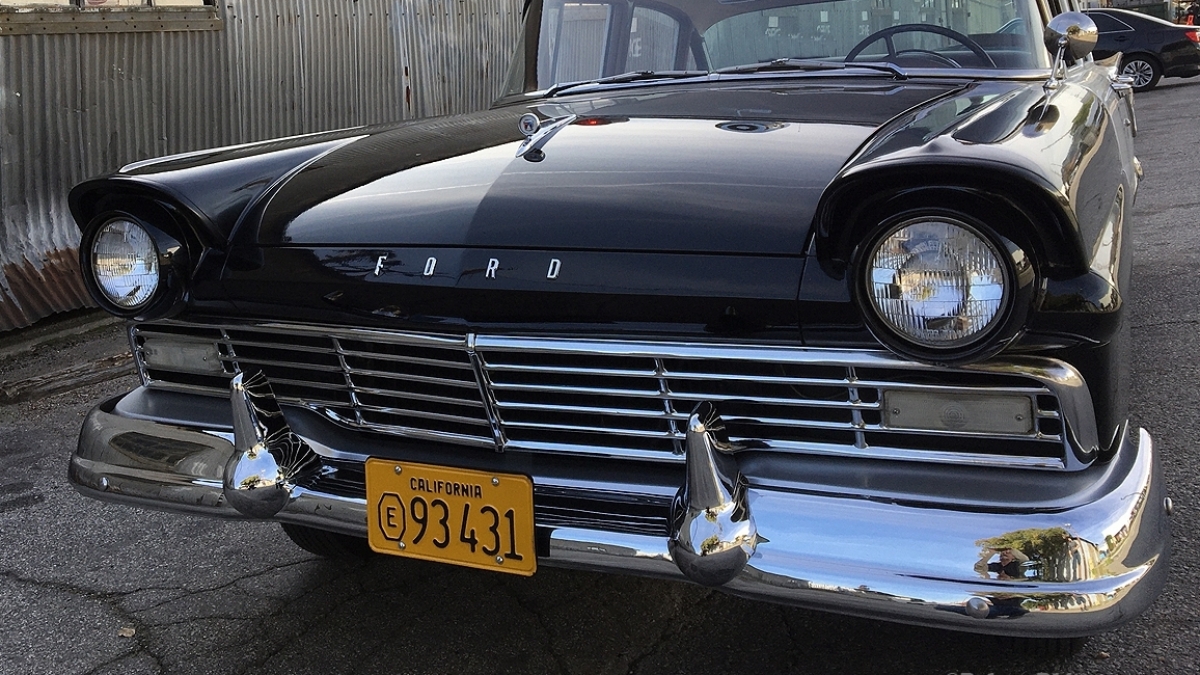 LA City's 57 Ford Custom 300 patrol car is historic, in that it was the last model powered with an inline 6 cylinder engine, mated to a 3 speed, manual (column shift) transmission. The 223 cubic inch Ford six was a strong runner, performing remarkably close to V-8's of the day. This is the only correct example of a LAPD 57 Ford known to exist.

Because of its rarity, we are mostly renting for film, TV, advertising and music video shoots. We prefer static shots but will pull into shots or drive a short distance.

It has a MOTOROLA trunk mount 2-way radio. Detailed focus was placed on this equipment. The radio and associated components were all manufactured in 1957. FM roof antenna is period correct, with the phenolic base painted white to reduce cracking per LAPD specs. Second antenna is AM radio type, including modifying the radio to have AM type antenna jack. LAPD cars received dispatch calls on 1712 KHZ AM, and transmitted back to HQ on 155.01 MHZ FM. This is the reason for two different type antennas. The rare "communications equipment" brass ID plate was reproduced at considerable expense. The car is equipped with an electronic module that plays LAPD Valley Division calls through the Motorola speaker. They play in a continuous loop. These are recorded onto a SD card, and edited to eliminate any information that did not exist in 1957… Totally realistic!

GENUINE LAPD EQUIPMENT
The roof mounted "Can Lights" are vintage S&M model 757's used on a LAPD Central Division (1-983) Black & White unit. They have GE 4001R seal beams front and rear. LA did not use Amber rears until 1963). The siren is a B&M model S8B. It produces a robust, spine tingling sound. Also siren related are the deluxe horn ring (part of a police package), and a floor mounted button on the passenger side, for use by a second officer. This was helpful to the driver who was busy shifting gears and maneuvering the vehicle on code three calls.

LICENSE PLATES
Original un-restored license plates, numbered only 174 digits from the ones displayed in the original photo of a LAPD 57 Ford. Totally period correct, they could easily have been issued to LA city vehicles including LAPD. The City owned several hundred vehicles in the 1950's, which included 500 or more 57 Fords. 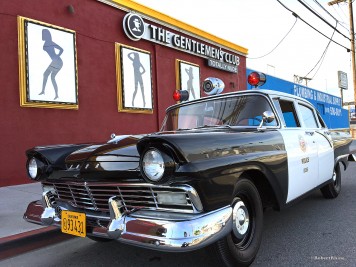 “I own two rare mint vintage vehicles available to rent for film television, commercials and music videos only.:

Robert's Garage
Continue Conversation
Reserve a Car
Create New
Contact owner
Pickup & return location
Verification
Your phone number
Invalid code, please try again
Your phone number
Thank you!
Phone number was verified successfully.
Smoking
Renters and their passengers are not permitted to smoke in any vehicle in the DriveShare marketplace. Violators are subject to fines and removal from the community.
Driving rental
Find some great roads and experience the car of your dreams from behind the wheel.
Chauffeured Rental
Do you want to be driven in an interesting car? This option is great for weddings or special events.
Event Rental
For non-driving uses like photo shoots and other static displays.
Security Deposit
DriveShare requires a security deposit before you may drive any car. The deposit will be used for any miscellaneous items that may pop up. Deposit amounts are set by each owner. Please refer to our Renter FAQ for additional information.
Weather Policy
Due to the uniqueness of the vehicles listed in the DriveShare marketplace, owners reserve the right to cancel a rental up to 48 hours prior to a rental due to pending inclement weather. Please refer to our Cancellation Policy for further details.
State/City Fees/Taxes
Delivery Fee
Optional: you can add a flat fee for pickup at an airport.
Delivery Fees
Delivery fee is calculated one way, so set the per-mile rate higher to accomodate your time for delivery and pick up.
Vehicle Availability
This car is only available to members of the clubs shown below. If you are already a member, click "Validate membership". If you want to become a member, clicking "Join" will bring you to the club's sign up page. Additional club fees may apply.
Verification!
We cannot validate your membership, as your email is not verified. Please verify your email address.
User authorization
Not a member yet? Sign Up Now!
Warning
Login with Facebook is temporarily unavailable. Please login using your email and password. If you do not know your password, please use "" link on login screen.
Password recovery
Password recovery
Password recovery success.
Please check your email.
Password recovery
Password recovery failed.
Such user does not registered.
Newsletter signing
Thank you for signing up for the DriveShare newsletter.
Be on the lookout for updates, featured cars and exciting events in your area!