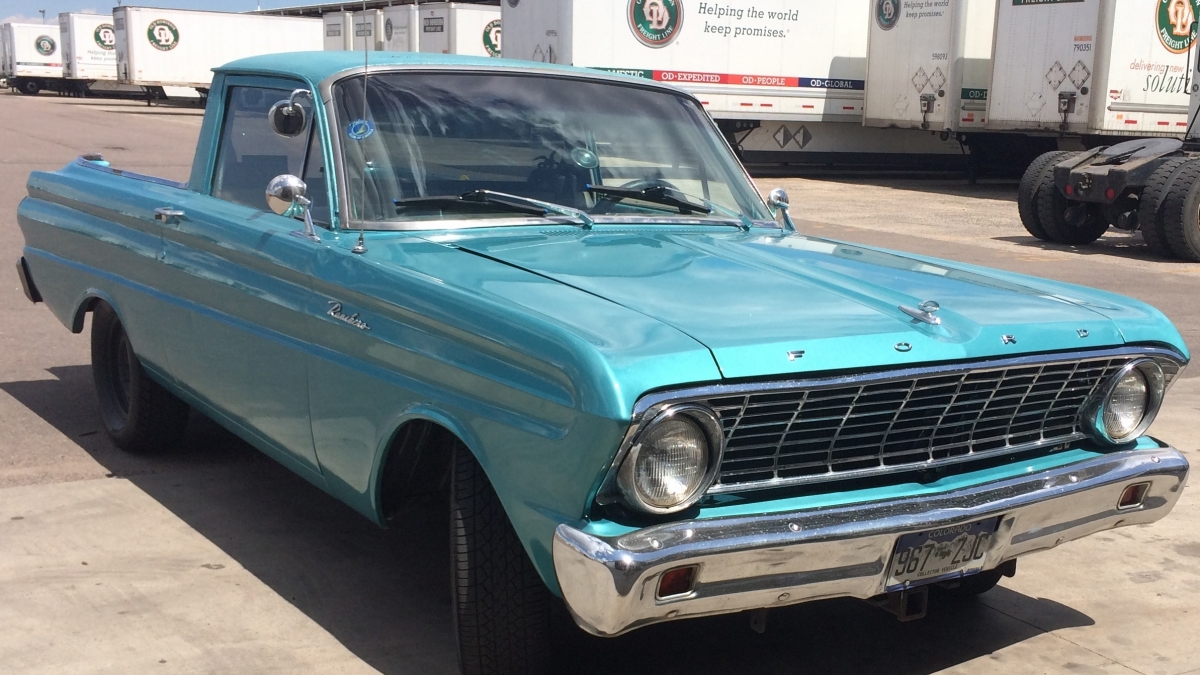 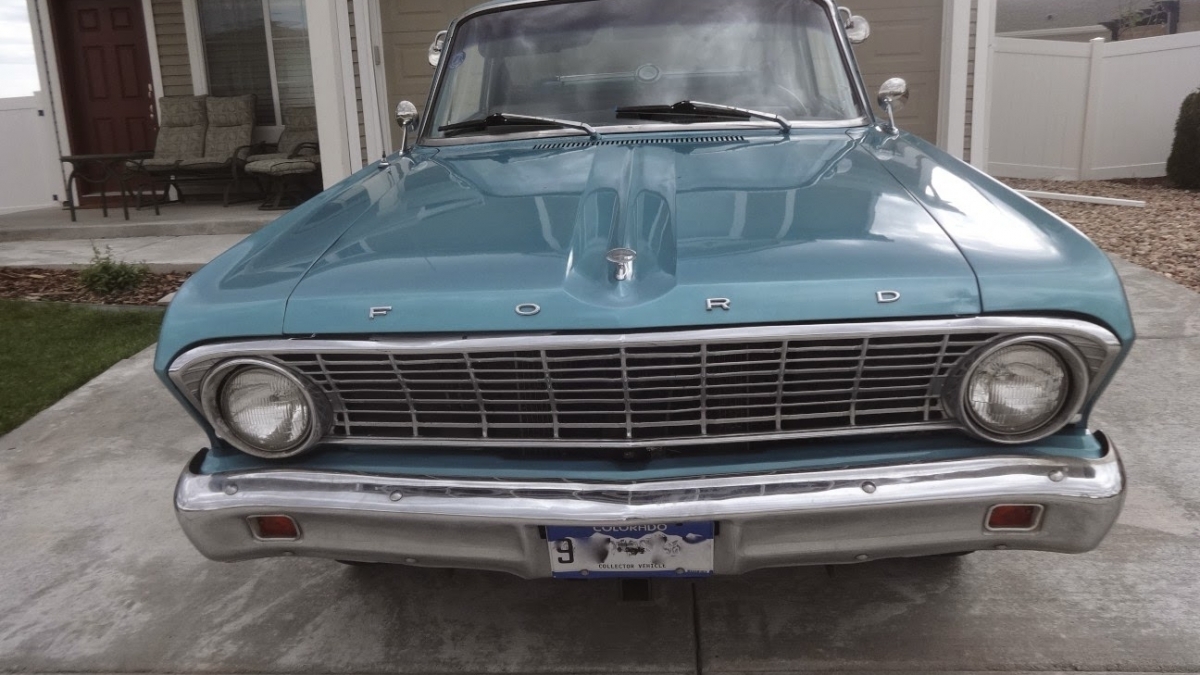 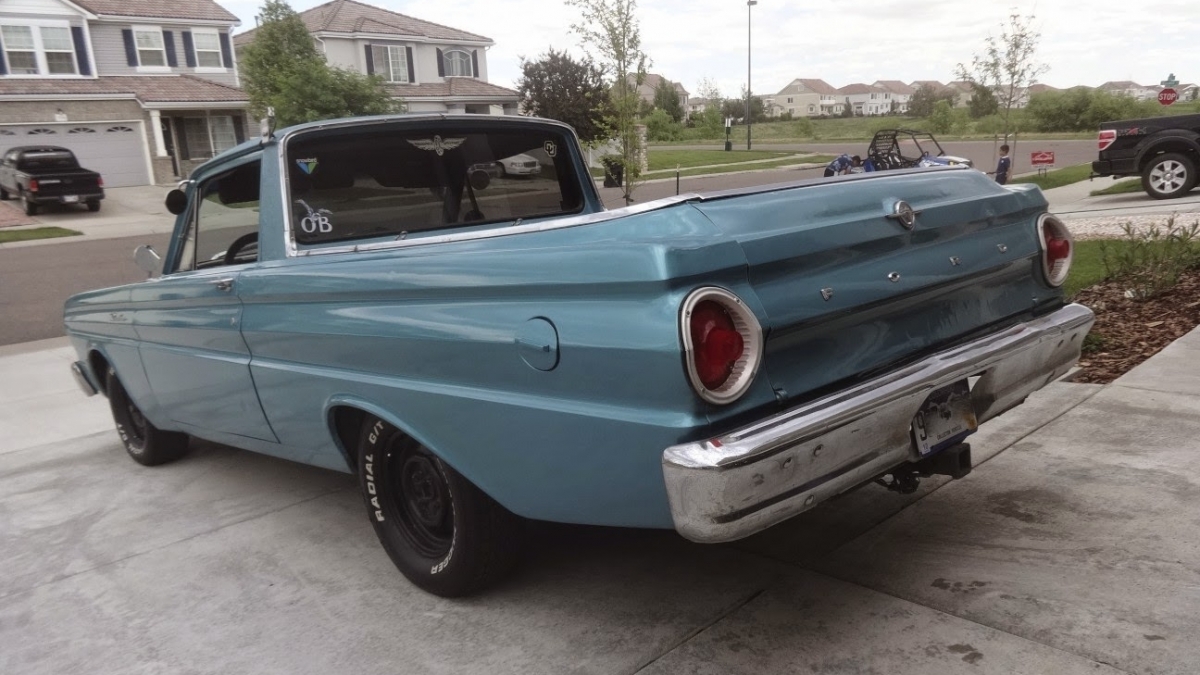 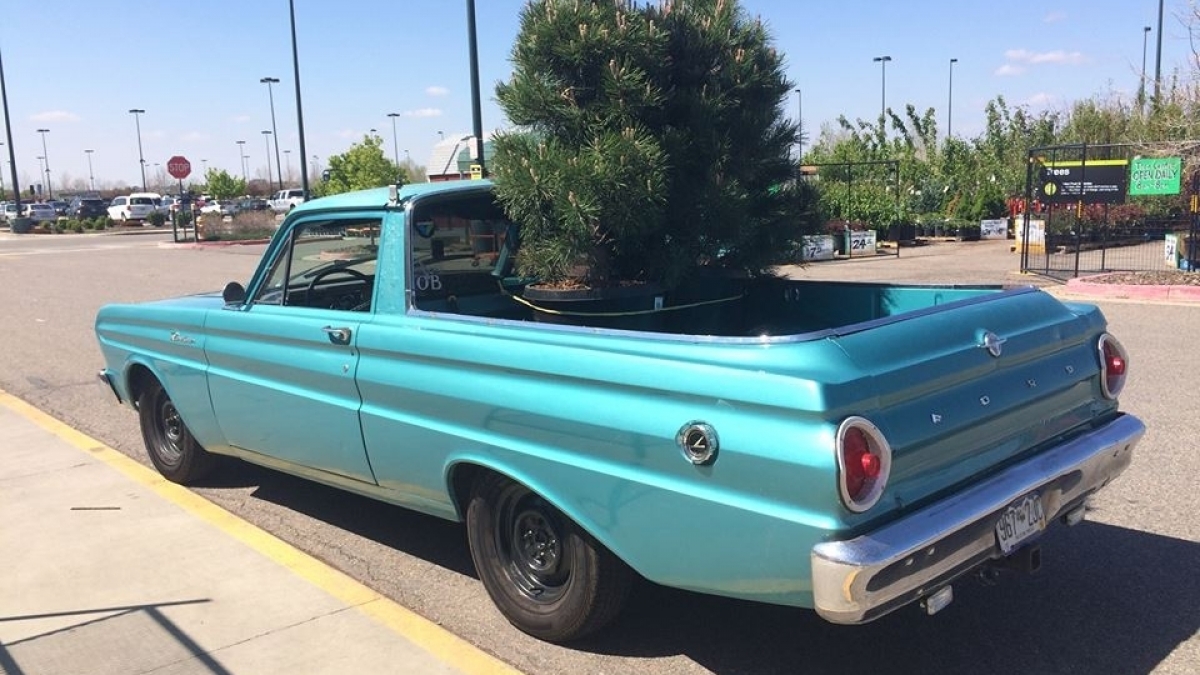 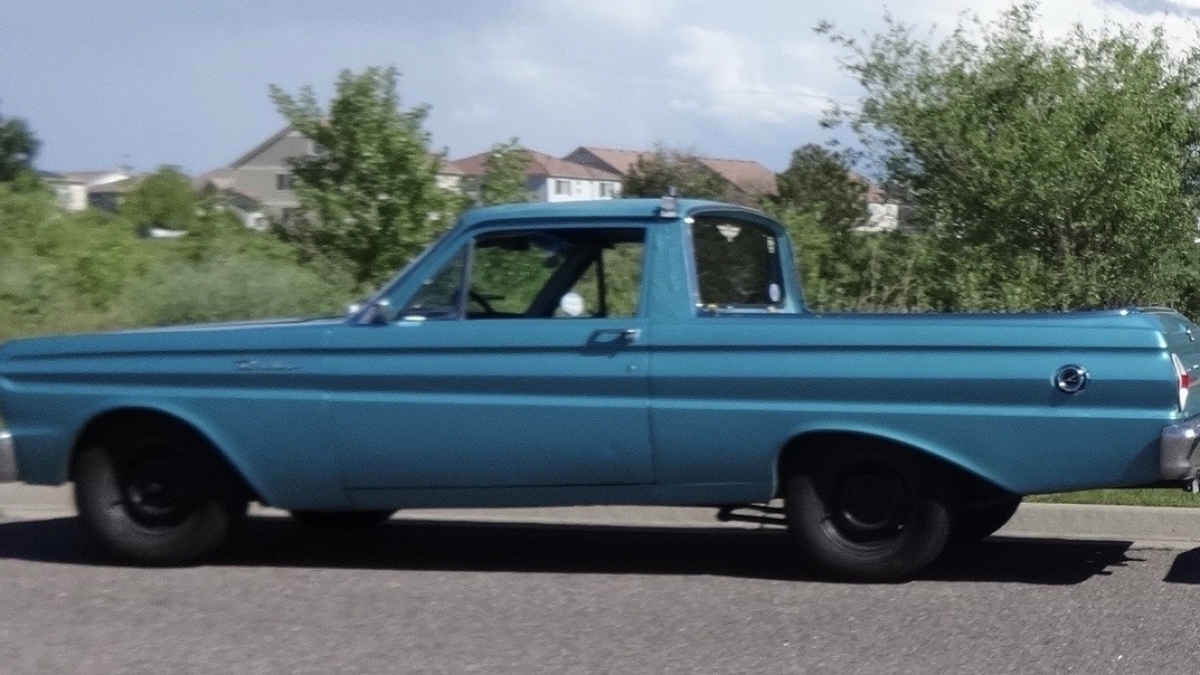 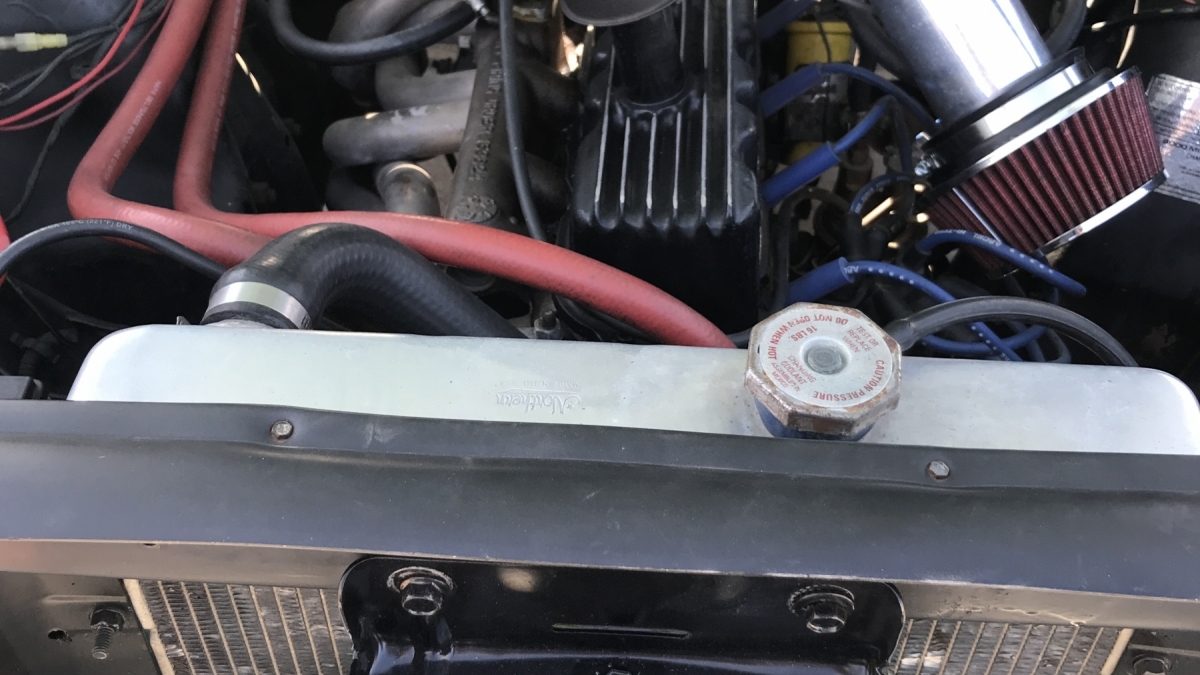 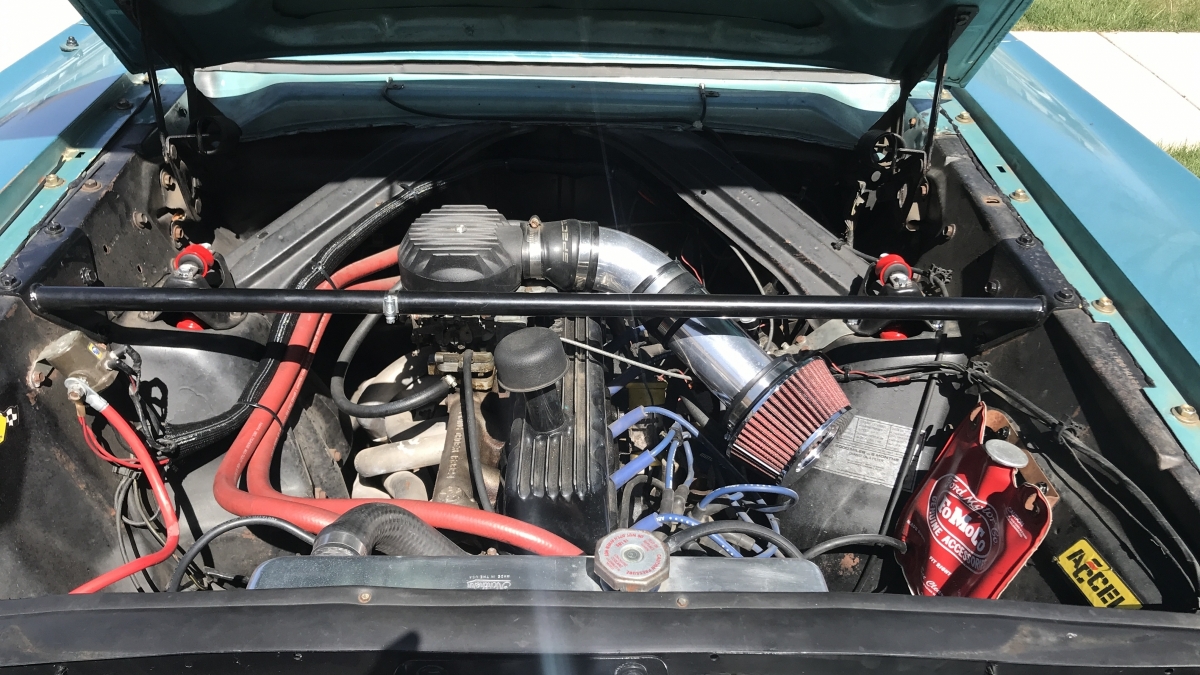 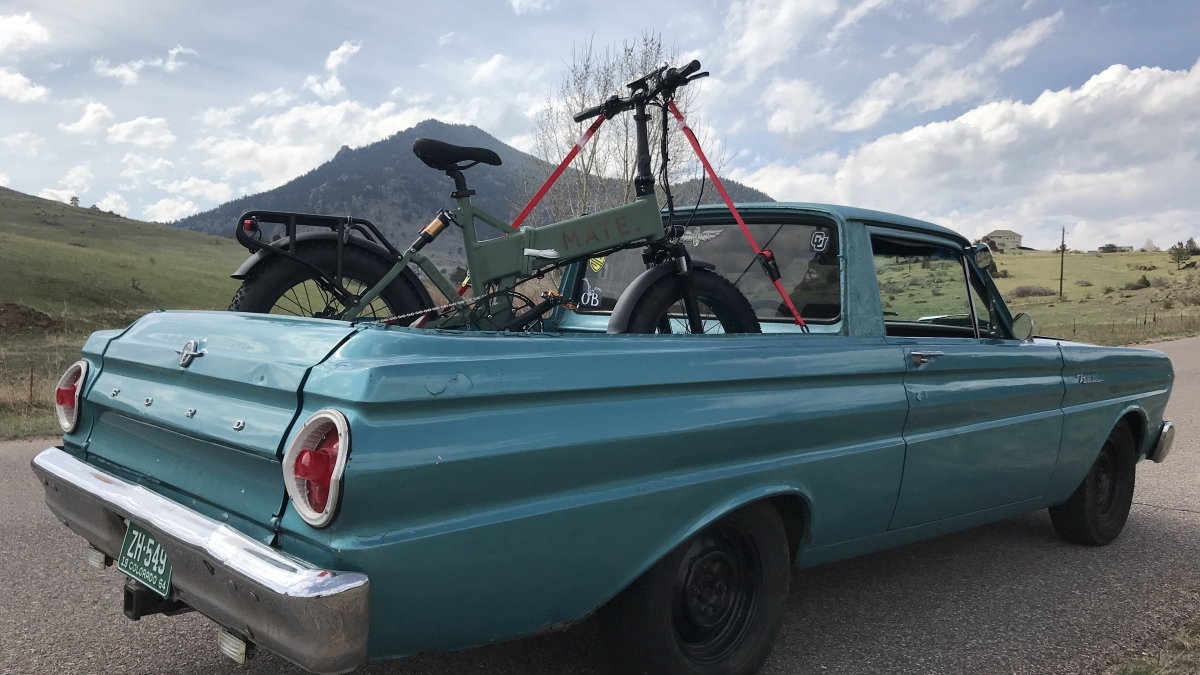 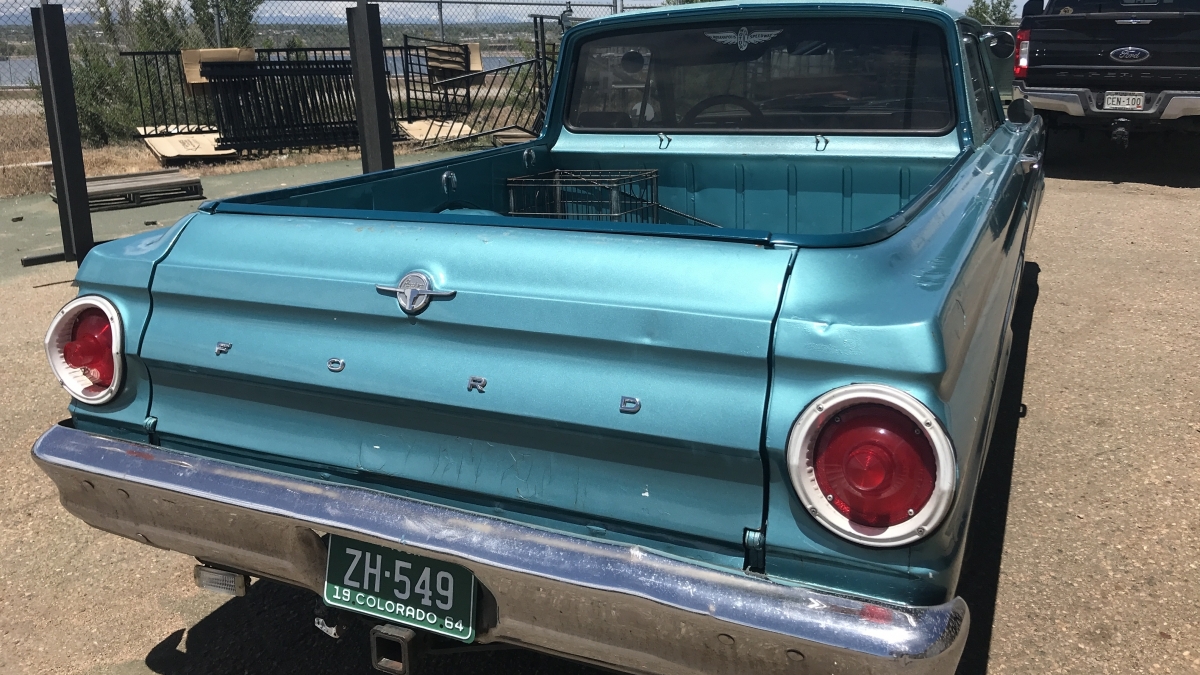 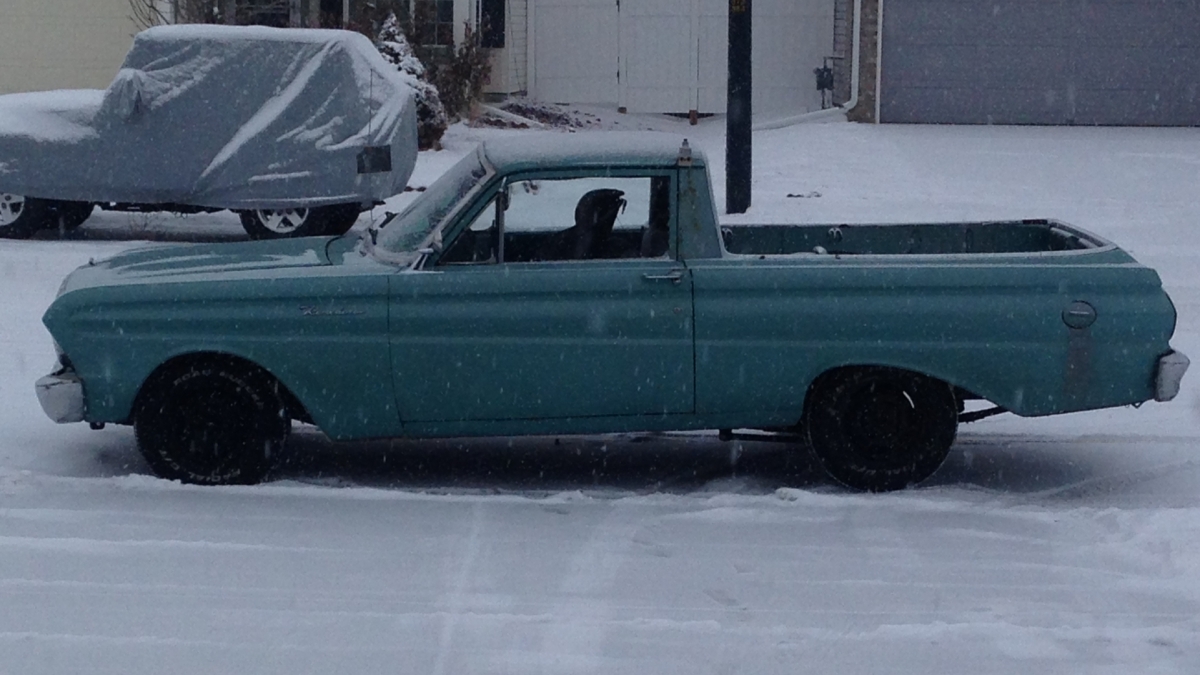 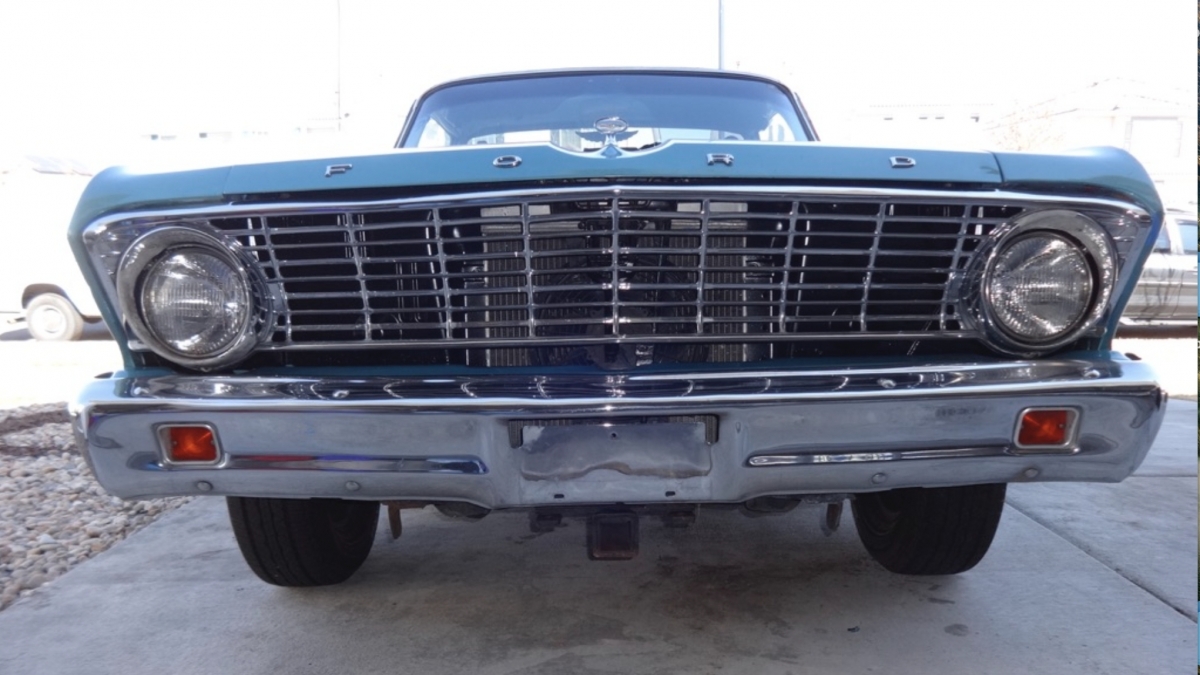 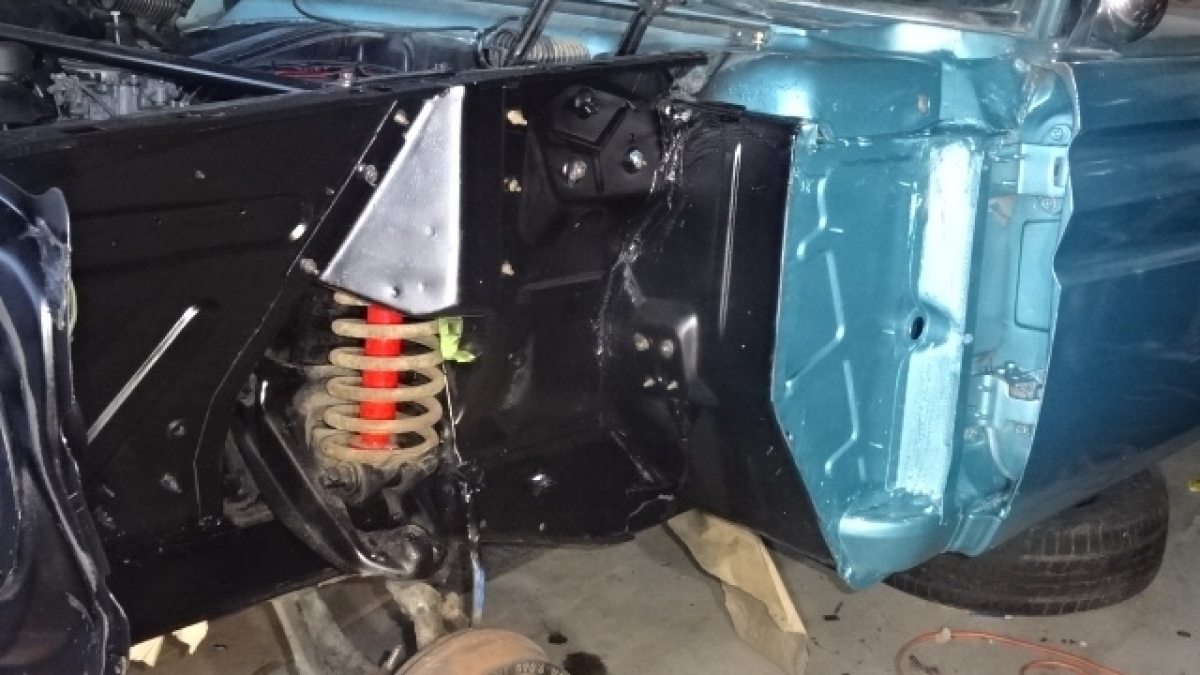 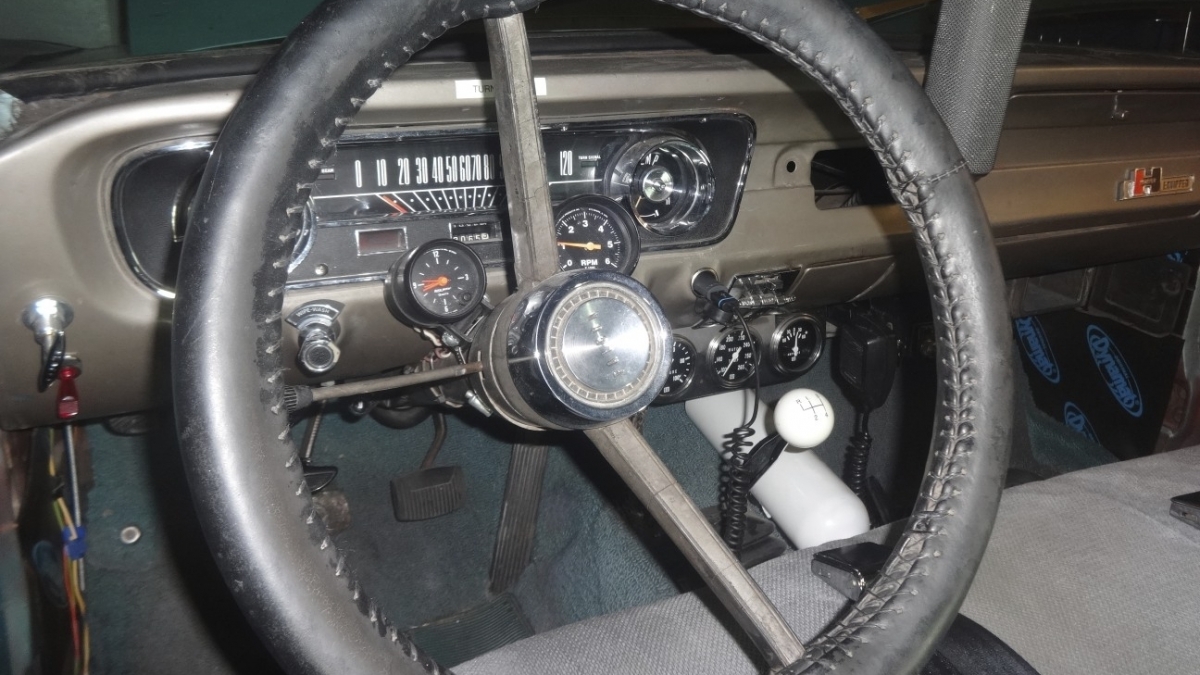 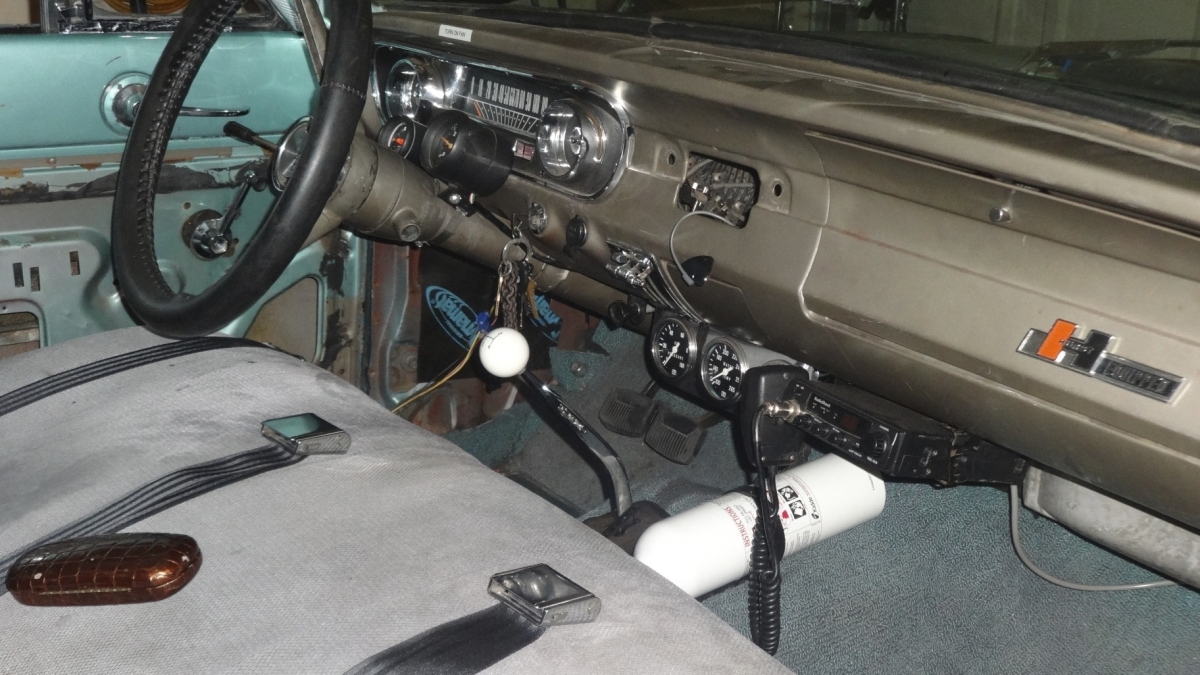 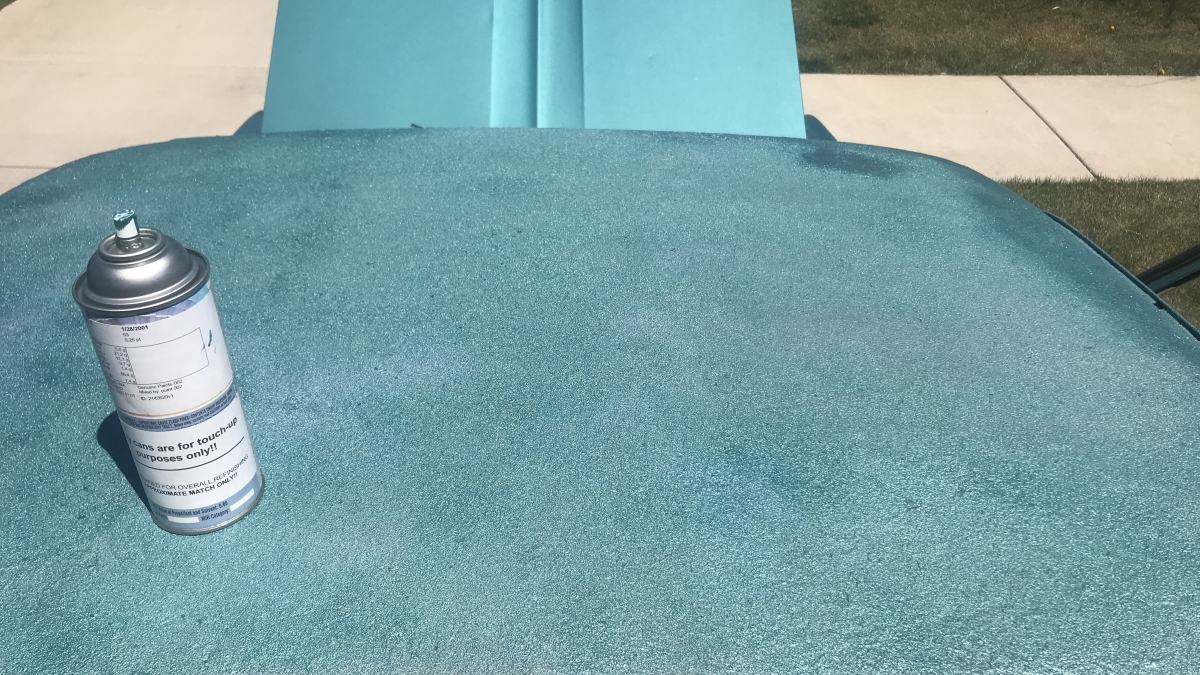 This Ranchero is a rescue case. It spent the first ten years of it's life as a carpet delivery truck in Albuquerque, NM. It spent the next 25 years in two salvage yards. I bought it from Chavez Salvage in 2001 for $450. It did not run for the want of one little piece of carburetor linkage and rthen it ran badly for about 2 years until I started rebuilding the entire truck. All the mechanicals, engine, tranny, brakes, suspension, are all new I was going to use it and dump it but I discovered the connection of the early Falcons to the Holman-Moody Monte Carlo Rallye Falcons of the mid-sixties. Pure factory sponsored race cars.

I did the research on the suspension mods of the Rallye Falcons and the GT350 and put them all on this Ranchero, plus I added a rear anti-sway bar, Traction Master traction bars, plus a welded trailer hitch stiffening the rear frame.

This little truck is no looker and challenging to drive, but what a drive it is with a Hurst Competition Plus shifeter linkage on a bespoke David Kee 4-speed toploader wtih a 3:50 rear end and race car inspired front and rear suspension. This is the same transmission and linkage set-up as NASCAR uses. Going through the gears is half the fun of driving this truck and hard cornering is the other half.

Don't get a ticket. The small engine will keep you grounded and legal but no less fun to drive up Coal Creek Canyon raod. 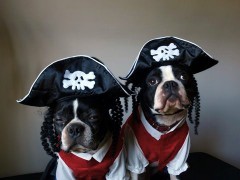 Ken's Garage
Continue Conversation
Reserve a Car
Create New
Contact owner
Pickup & return location
Verification
Your phone number
Invalid code, please try again
Your phone number
Thank you!
Phone number was verified successfully.
Smoking
Renters and their passengers are not permitted to smoke in any vehicle in the DriveShare marketplace. Violators are subject to fines and removal from the community.
Driving rental
Find some great roads and experience the car of your dreams from behind the wheel.
Chauffeured Rental
Do you want to be driven in an interesting car? This option is great for weddings or special events.
Event Rental
For non-driving uses like photo shoots and other static displays.
Security Deposit
DriveShare requires a security deposit before you may drive any car. The deposit will be used for any miscellaneous items that may pop up. Deposit amounts are set by each owner. Please refer to our Renter FAQ for additional information.
Weather Policy
Due to the uniqueness of the vehicles listed in the DriveShare marketplace, owners reserve the right to cancel a rental up to 48 hours prior to a rental due to pending inclement weather. Please refer to our Cancellation Policy for further details.
State/City Fees/Taxes
Delivery Fee
Optional: you can add a flat fee for pickup at an airport.
Delivery Fees
Delivery fee is calculated one way, so set the per-mile rate higher to accomodate your time for delivery and pick up.
Vehicle Availability
This car is only available to members of the clubs shown below. If you are already a member, click "Validate membership". If you want to become a member, clicking "Join" will bring you to the club's sign up page. Additional club fees may apply.
Verification!
We cannot validate your membership, as your email is not verified. Please verify your email address.
User authorization
Not a member yet? Sign Up Now!
Warning
Login with Facebook is temporarily unavailable. Please login using your email and password. If you do not know your password, please use "" link on login screen.
Password recovery
Password recovery
Password recovery success.
Please check your email.
Password recovery
Password recovery failed.
Such user does not registered.
Newsletter signing
Thank you for signing up for the DriveShare newsletter.
Be on the lookout for updates, featured cars and exciting events in your area!