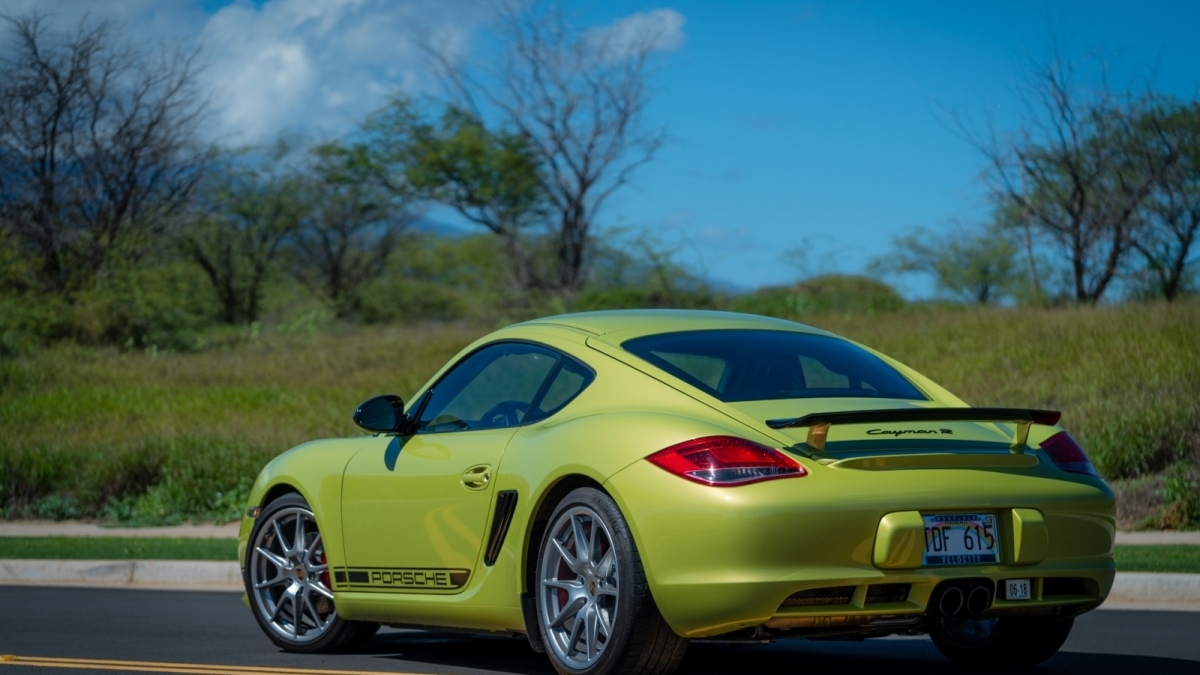 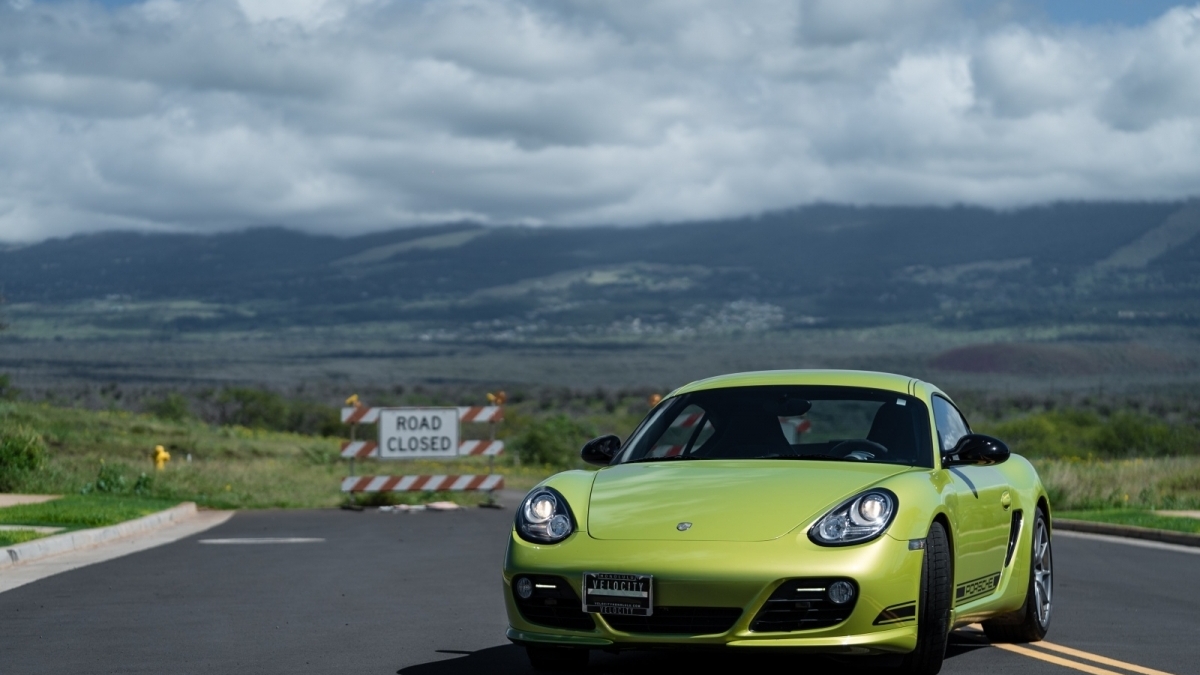 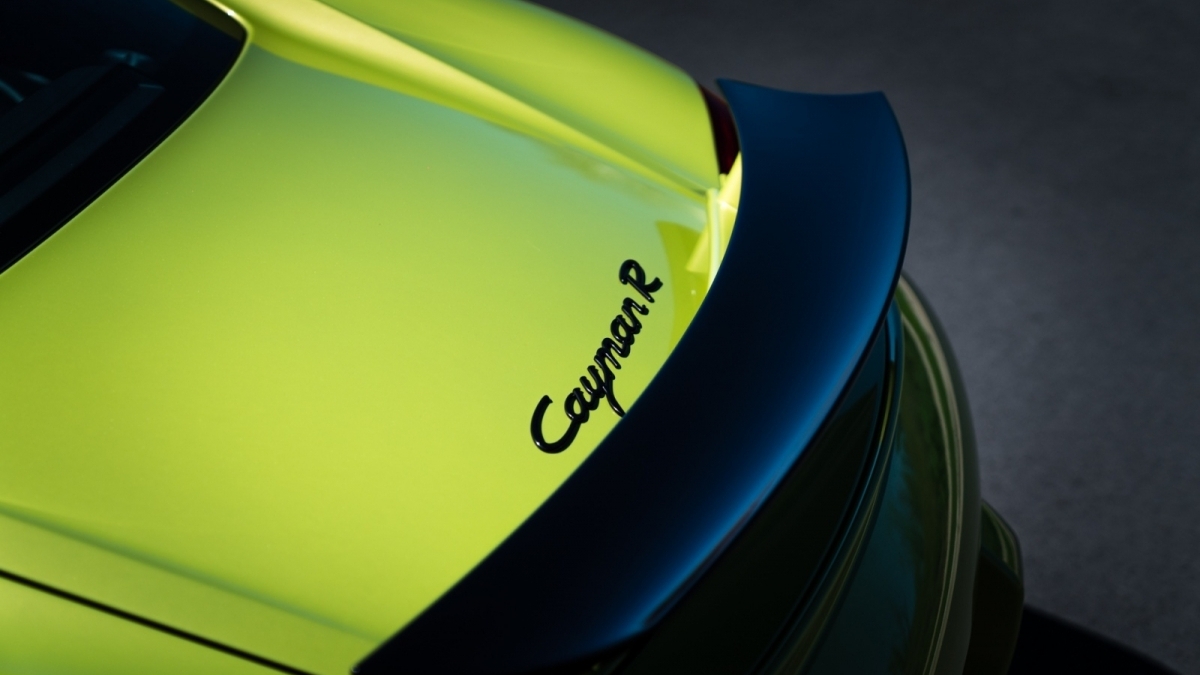 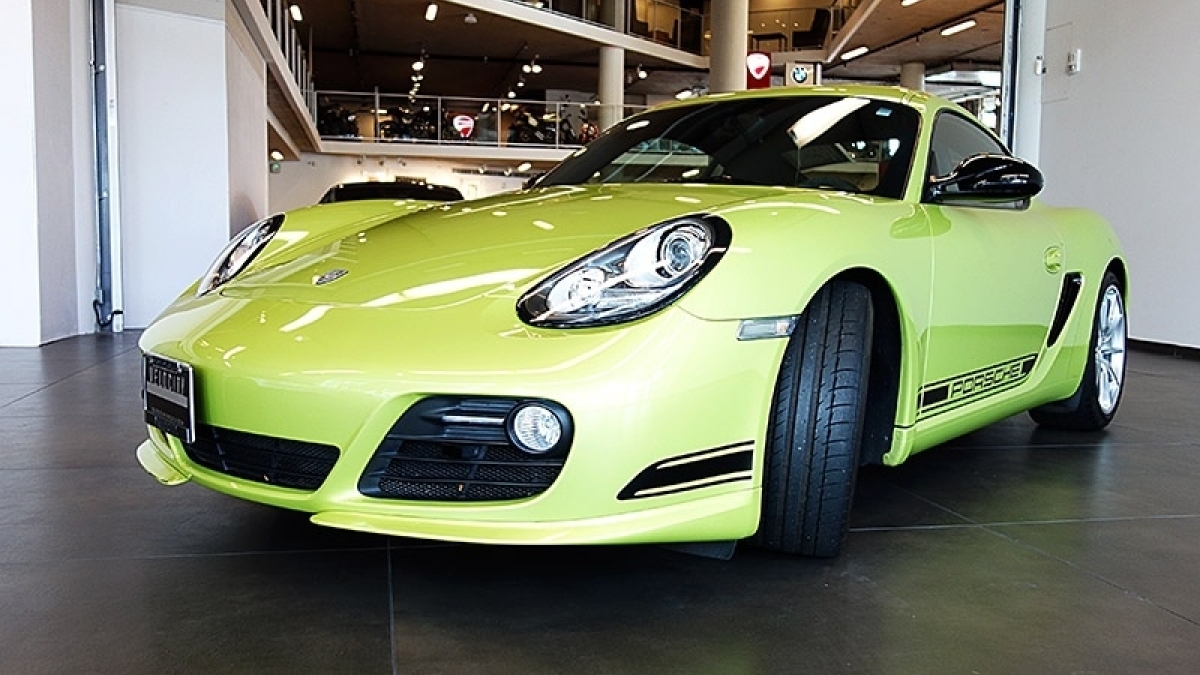 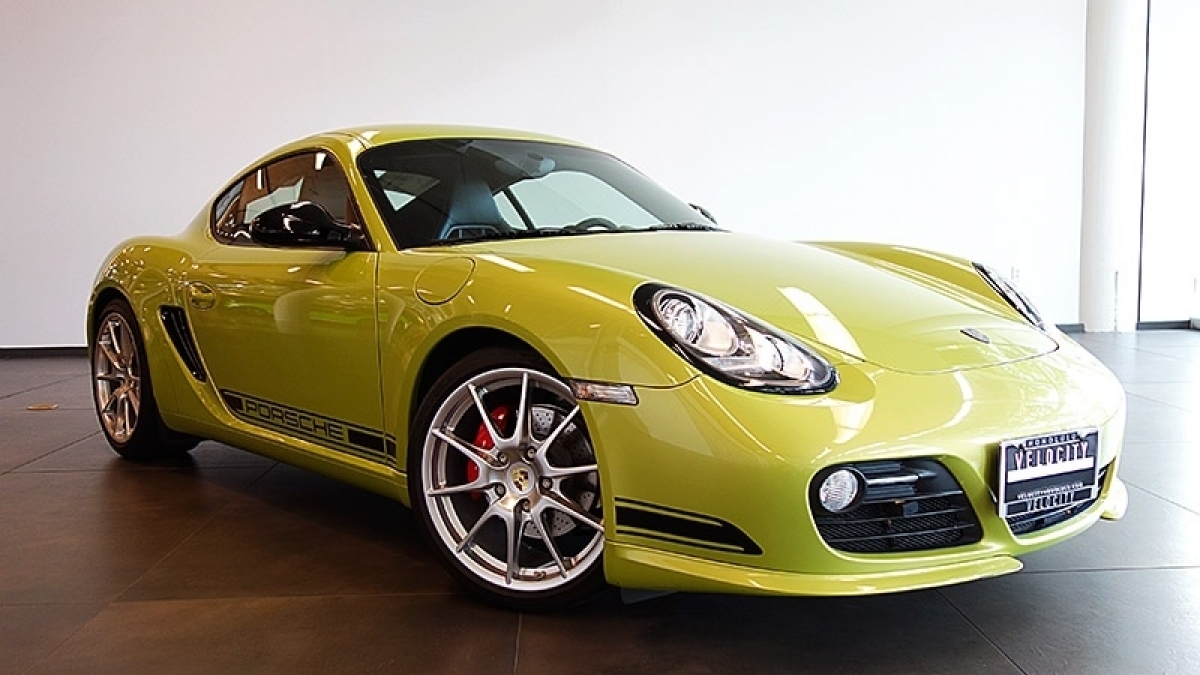 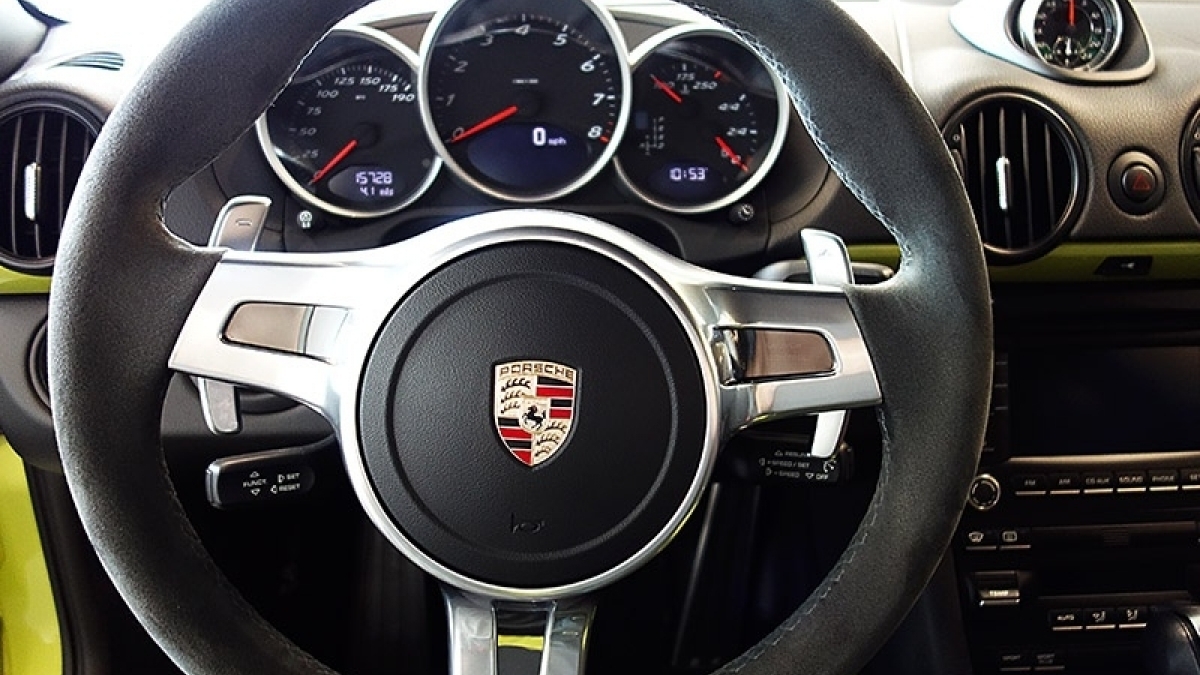 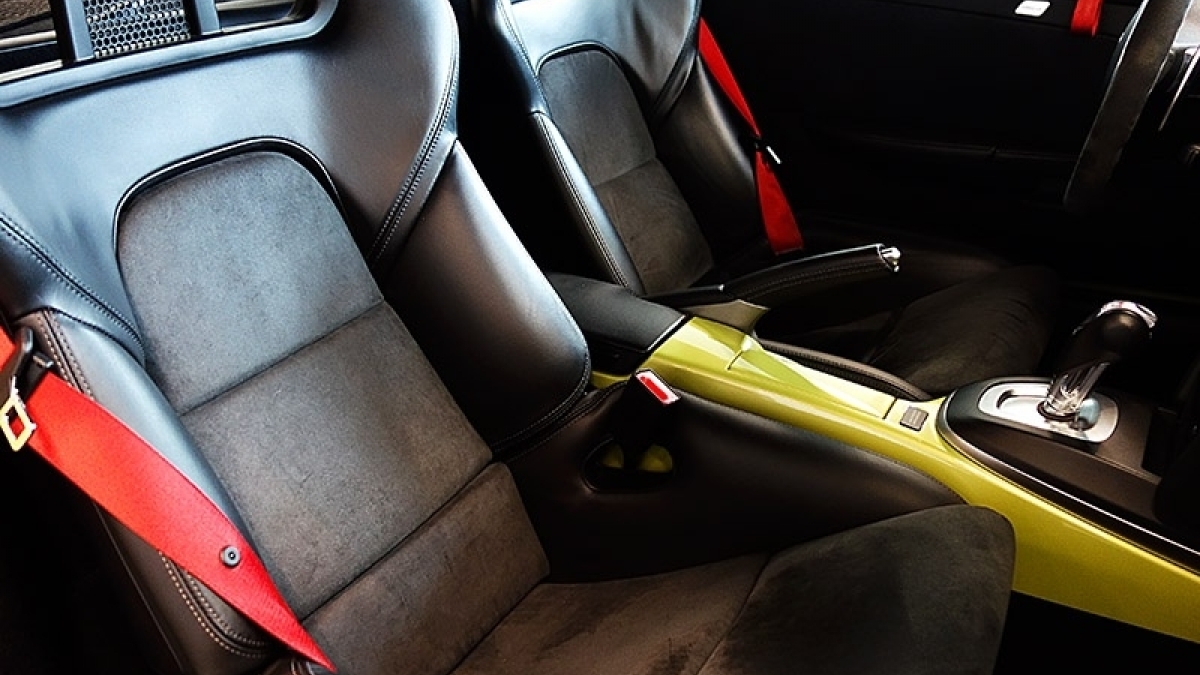 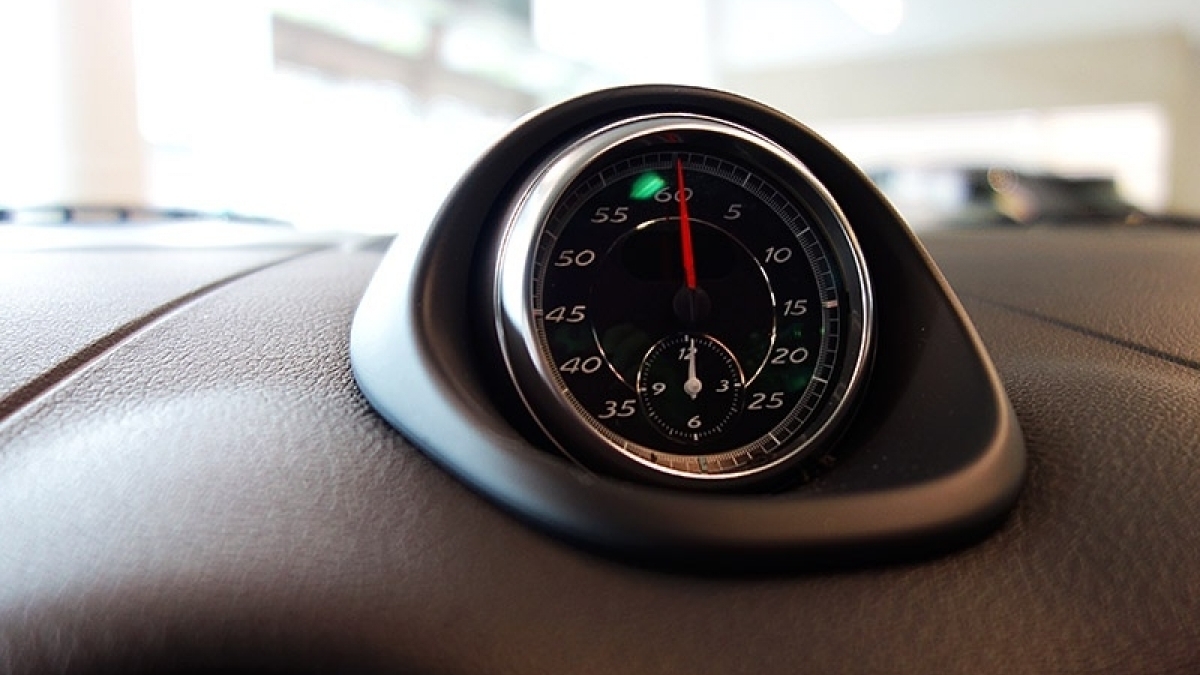 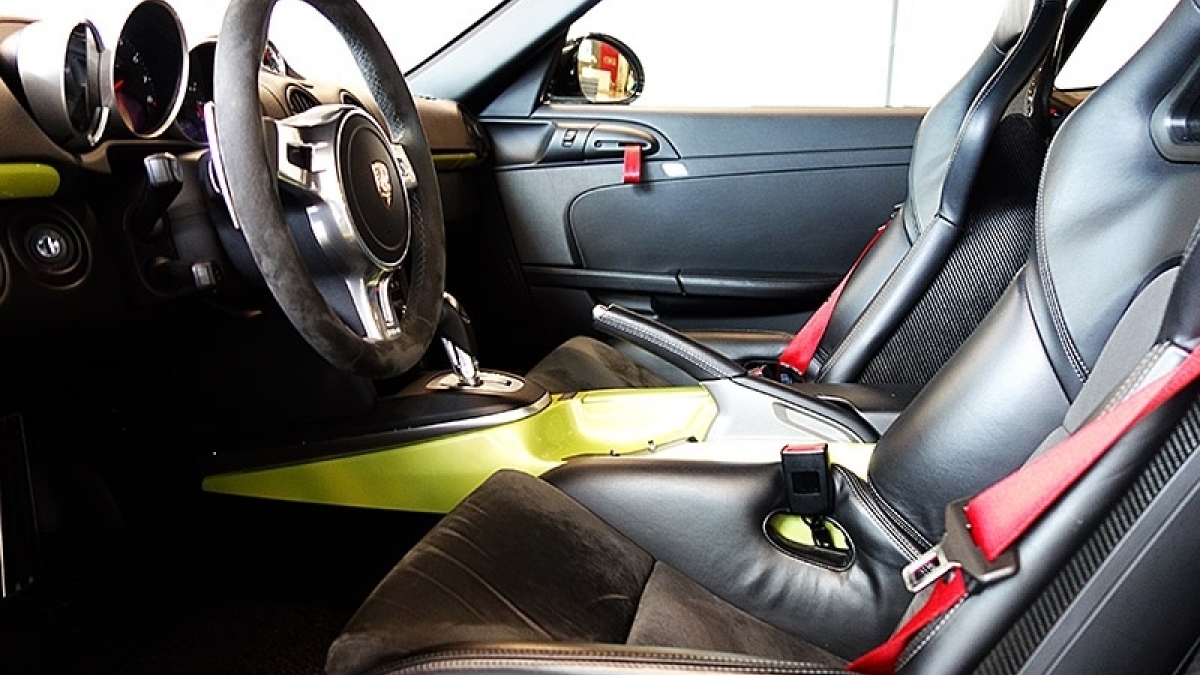 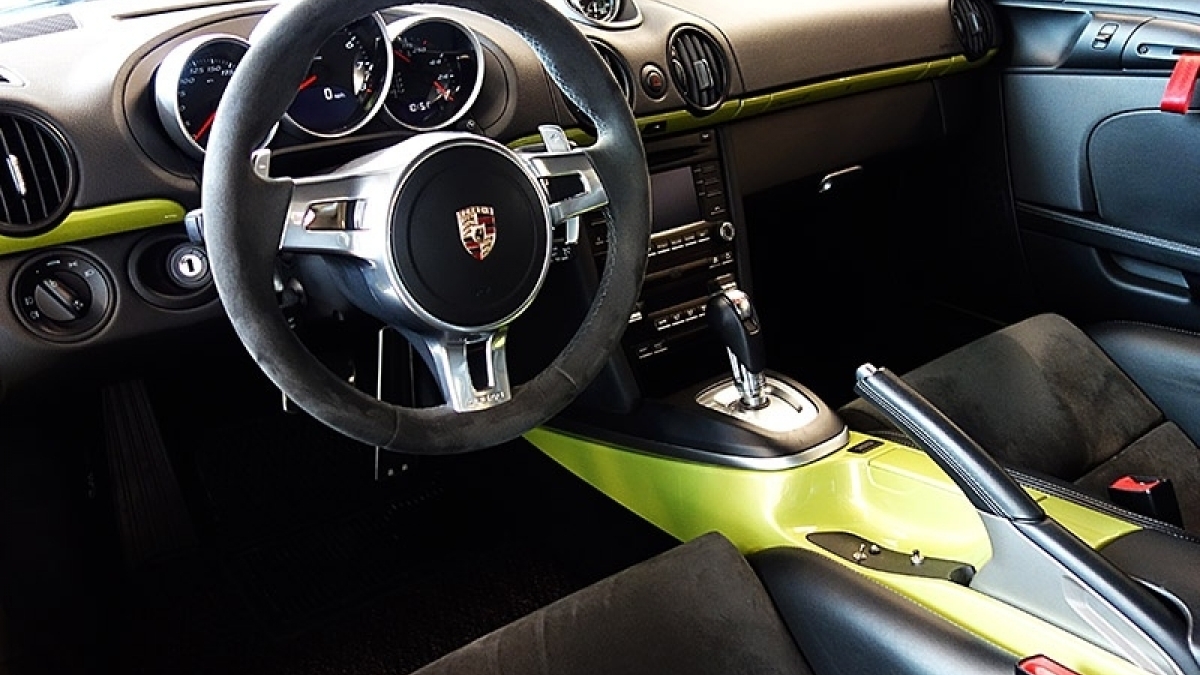 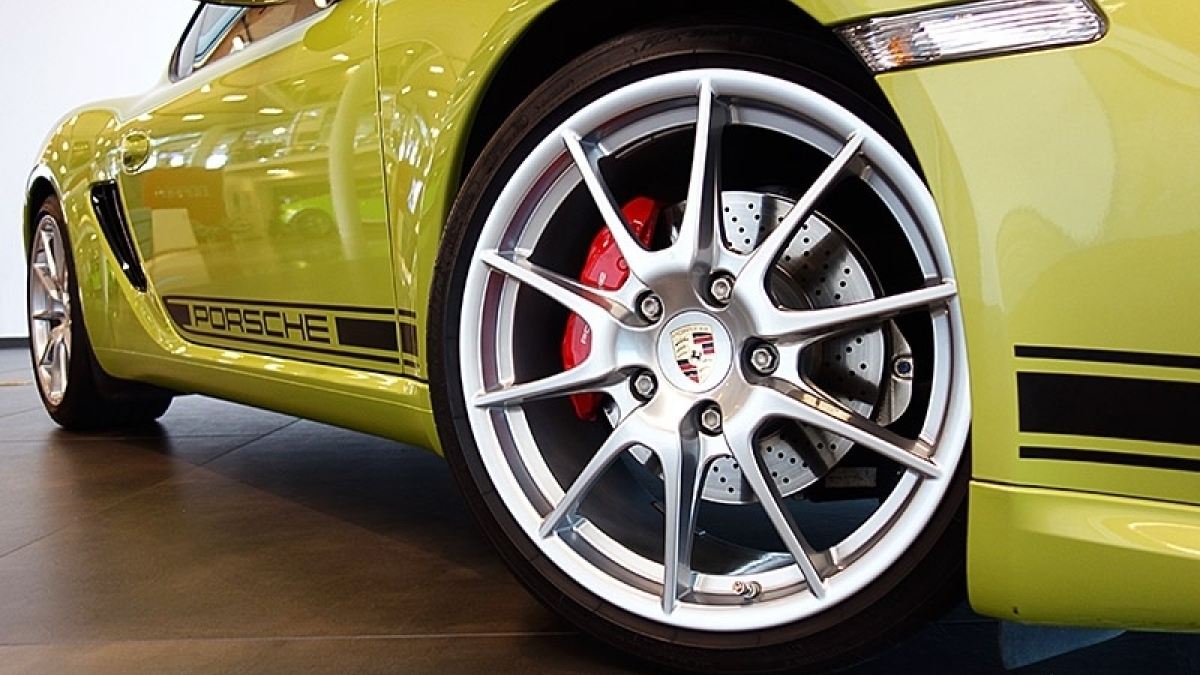 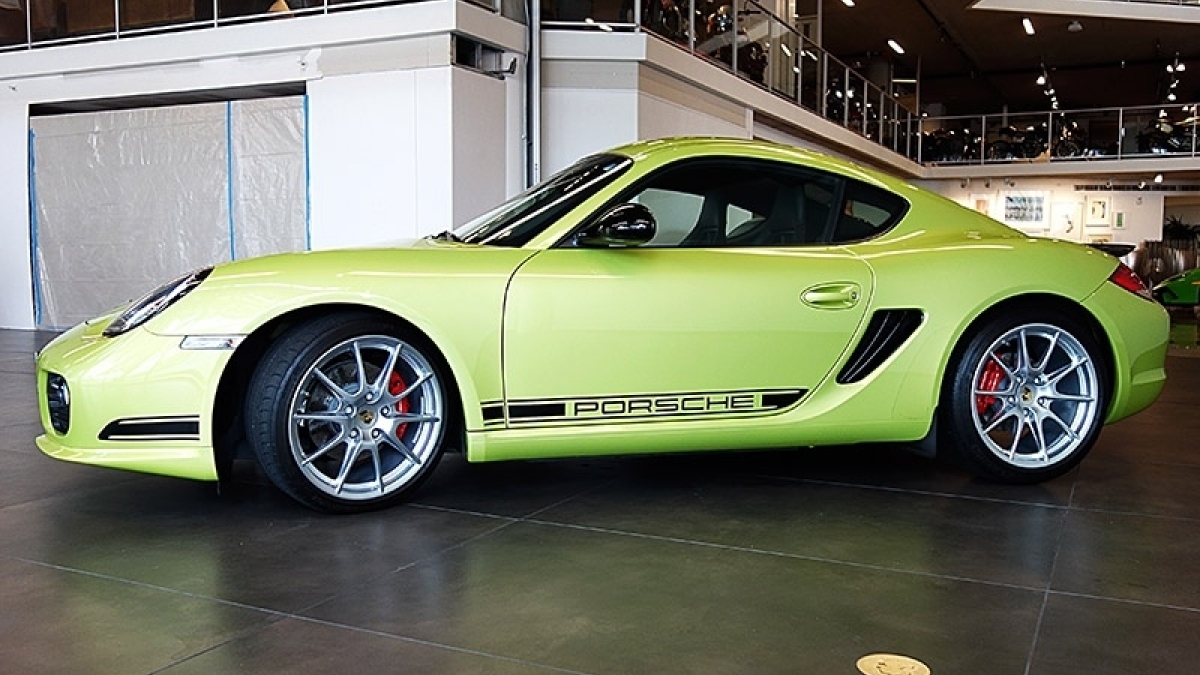 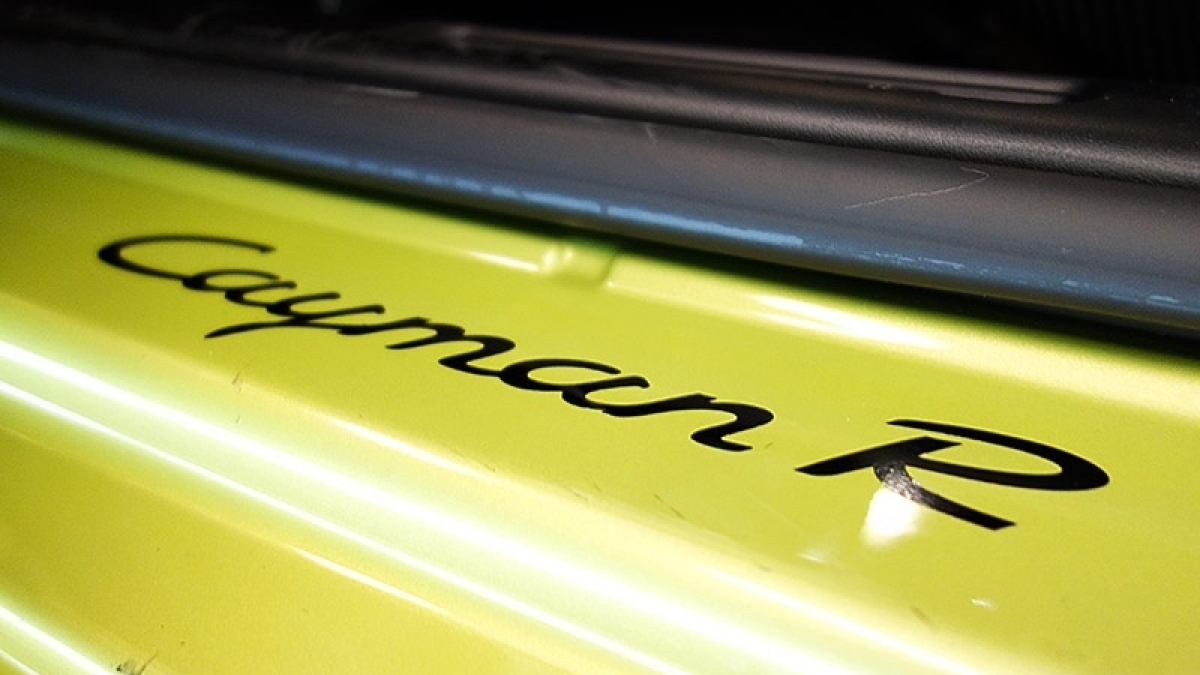 Jeremy Clarkson has long labeled the 911's little cousin the Cockster! Clarkson has oft argued that both Cayman and Boxster configurations look the same coming and going, and should really be called the Palindrome! Another popular argument has always been that a 911 is basically a squashed Beetle with a body kit, and thus it was designed by Hitler! No matter how you slice it, the engine is in the wrong place in a 911;way out back behind the axle, where it acts like a big pendulum, and does its best to put you up a tree as you exit each corner! In order to offer a bit of variety to this particularly suicidal driving characteristic, the mid engine convertible known as the Boxster was introduced in 1996. Following the rousing success of the little two seat roadster, the Cayman was introduced in 2006, internally designated the 987. The second generation of the platform culminated with the most track focused version of the Cayman to date, the 2012 Cayman R! Featuring lightweight panels derived from the 911 gt3, lightened wheels, fiberglass and carbon fiber racing buckets, and an overall lightened interior, the Cayman R is 121 pounds lighter than its more road focused sibling, the Cayman S. Add to that a lowered and stiffened suspension based on the gt3 spring rates, a direct fuel injected 3.4 litre boxer 6 engine with a more freeflowing exhaust and updated tune, the Cayman R boasts a 10 horsepower increase over the S. With the PDK dual clutch transmission, and Sport Chrono package equipped like ours, 0-60 times of 4.4 seconds have been recorded! The was the first real effort by Porsche to allow the Cayman to step out of the shadow of the 911. As the last hurrah of this generation, the Cayman R is the ultimate expression of this small two seater, with its rare Peridot Metallic Green paint, Porsche script on the rockers, and fixed rear spoiler...there's no mistaking that this Cayman is more than a hairdressers car! And that's before you turn the key! For the roads here on maui, there are few cars that balance fun and track levels of seriousness as well as our Cayman R! Here at Maui Mini Go, we strive to provide cars that will give the driver a grin and a giggle even before you turn the key, and once behind the wheel we want that grin to be plastered on your face till you hand the keys back! With the newest member of our fleet, I think mission accomplished!

I am willing to drive up to 15 miles to meet. Prior to rental I would like to review the features of the vehicle and take a short drive to make sure you are familiar with everything. 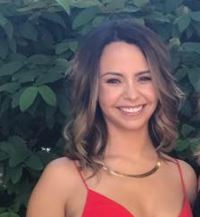 Laura Leonardi
David could not have been more accommodating throughout the rental process. He helped keep this a surprise from my boyfriend while running a background check initially. Then, once I was on Maui, he was super flexible with our pick up and drop off time. He gave us an outstanding rundown of the vehicle and suggested a perfect route for us to take the car on for the day. The car could not have been more perfect and David made this process smooth and stress free. I would highly recommend renting from David in the future. I know if I'm ever on Maui again I'll be hitting him up for one of his Mini Cooper rentals. 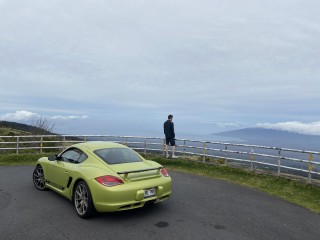 Jerzy Banasiak
Any fan of Porsche knows that the Cayman R is a rarity, even more so in this Peridot Metallic green exclusive to the R. After just one day with the car, I was beyond impressed with it. I feel like the 911 after the 997 has gotten too big & bloated of a coupe. This thing feels perfect in size, similar to my 996 Turbo. Obviously, this is a different experience as a mid-engine NA RWD car versus a rear-engine turbo AWD car.

As for the chassis itself, it is remarkably neutral despite not being exactly 50/50 weight distribution. This is down about 400 lbs from a 996 Turbo, and I could feel the extra agility as a result. Going through the twisties was effortless, and the car rotated exactly how I wanted it to. It was very predictable how the tires got loaded up and the weight shifted around. Unlike a 911, I feel like you'd have to try REALLY hard to upset the chassis and lose control. And while obviously this does not have 4 wheel steer, at times it sure felt like it with the way the rear of the car tracked my inputs from the front. It does have "only" 330HP, but the power delivery has a surprising grunt to it once you get up in the rev band and the howl that comes out of the R's pipes is absolutely intoxicating. Finally, special mention for the seat. Sweet baby Jesus, this is hands-down the BEST seat I've ever sat in. To the point I regret doing so as I want one now for my 996 Turbo. It kept me locked down the whole time no matter what I was doing, and yet it was unbelievably comfortable. I didn't know a race bucket seat could be this good.

I see now what the car journalists meant that the Cayman R is one of the best balanced Porsches ever made. It also fits the island with the gorgeous color and making mincemeat of the great driving roads while still maintaining enough compliance to the point of being a worthy daily-driver. If I lived on Maui, I would likely swap my 996 Turbo out with this. Fantastic car, highly recommend it for anyone to see what a modern Porsche SHOULD feel like. 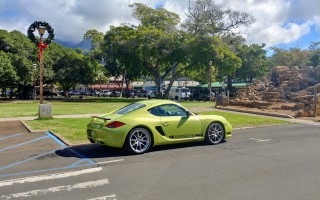 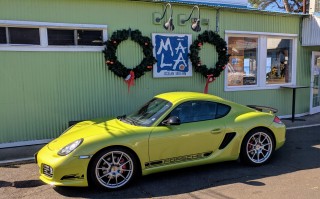 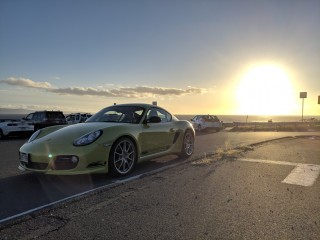 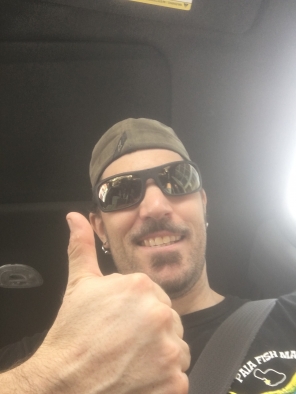 “Gear head, petrol head, goofball entrepreneur that would rather play with grown up toys than do a real job!! Been on Maui 17 years and still love it...come on...it's paradise!! Never been able to get over the sight of Thomas Magnum in his 308 cruising the streets of Oahu, just believe everyone should be able to have a similar experience here on island!”

David's Garage
Continue Conversation
Reserve a Car
Create New
Contact owner
Pickup & return location
Verification
Your phone number
Invalid code, please try again
Your phone number
Thank you!
Phone number was verified successfully.
Smoking
Renters and their passengers are not permitted to smoke in any vehicle in the DriveShare marketplace. Violators are subject to fines and removal from the community.
Driving rental
Find some great roads and experience the car of your dreams from behind the wheel.
Chauffeured Rental
Do you want to be driven in an interesting car? This option is great for weddings or special events.
Event Rental
For non-driving uses like photo shoots and other static displays.
Security Deposit
DriveShare requires a security deposit before you may drive any car. The deposit will be used for any miscellaneous items that may pop up. Deposit amounts are set by each owner. Please refer to our Renter FAQ for additional information.
Weather Policy
Due to the uniqueness of the vehicles listed in the DriveShare marketplace, owners reserve the right to cancel a rental up to 48 hours prior to a rental due to pending inclement weather. Please refer to our Cancellation Policy for further details.
State/City Fees/Taxes
Vehicle Availability
This car is only available to members of the clubs shown below. If you are already a member, click "Validate membership". If you want to become a member, clicking "Join" will bring you to the club's sign up page. Additional club fees may apply.
Verification!
We cannot validate your membership, as your email is not verified. Please verify your email address.
User authorization
Not a member yet? Sign Up Now!
Warning
Login with Facebook is temporarily unavailable. Please login using your email and password. If you do not know your password, please use "" link on login screen.
Password recovery
Password recovery
Password recovery success.
Please check your email.
Password recovery
Password recovery failed.
Such user does not registered.
Newsletter signing
Thank you for signing up for the DriveShare newsletter.
Be on the lookout for updates, featured cars and exciting events in your area!